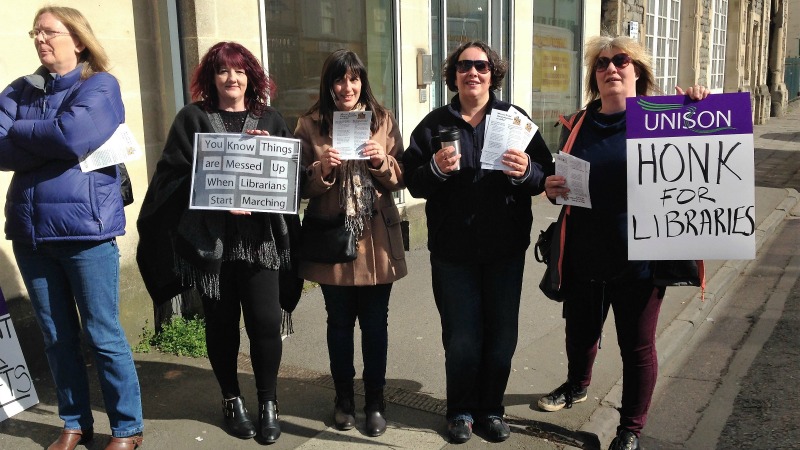 Bristol librarians gathered outside libraries across the city on Thursday as they went on strike to protest against altered shift patterns.

Outside Bedminster library, striking library staff cheerfully held up signs saying, “Honk for Libraries” and “You know things are messed up when Librarians start marching.”

Although they declined to comment without a union representative on hand (“I think they’re afraid of what we might say,” one woman joked), the assistants passed out fliers to passersby with information about the strike and tips on how to support library assistants.

The fliers, published by public service union Unison, detail how the shifts negatively impact library assistants by requiring them to work shifts “over more days, for fewer hours at a time.”

The fliers also noted that 50 per cent of library assistants are carers, many of them working part-time, and short shifts make it more difficult for them to look after their loved ones. They also cite problems with increased travel costs due to more days’ work and how the shift changes will make it difficult for the assistants to hold second jobs.

As the council previously told Bristol24/7, it believes the hours requested by the union don’t match how Bristolians wish to use libraries. They also mentioned that Bristol has more libraries per head than any other city in the country.

The same review that altered the library assistants’ hours also resulted in the closure of Eastville Library, which is in the process of being turned into a new community hub.

Read more: All Bristol libraries to close during strike