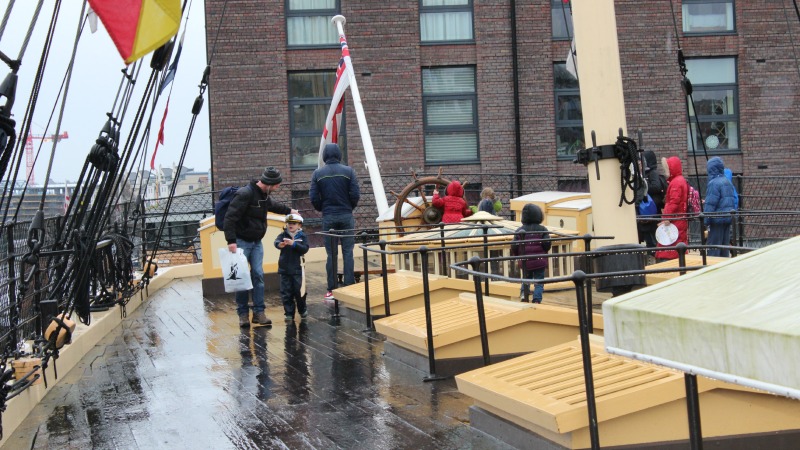 Brunel’s ss Great Britain was this month awarded the accolade for Best Told Story by Visit England. Rachel Morris headed down to the famous ship to see what all the fuss was about.

Visiting the ss Great Britain for the first time, as an adult without children, I had high expectations. I wanted to be entertained and informed. I demanded more than just a nice day out for families.

On entering the main building, I’m greeted by an actor in Victorian dress.  A good first impression and a real winner for the children, who crowd around his legs asking questions about his attire.

The tour begins beneath the ship in the dry dock. A welcome relief from the rain, the room replicates the climate of the Arizona desert, which helps slow down the rate of rust and corrosion (it’s a technique borrowed from the US Air Force whose aircraft boneyards are in Arizona). Here, you can see the bottom of the ship almost exactly as she was found in 1970 –  holes and all.

Next is the Brunel Institute, a sometimes interactive, walk-through museum, which takes you backwards in time through the story of the ship’s life; from her launch in 1843 to her recovery and return to Bristol.

Throughout, children can have a go at driving a simulated ship, or pulling on various levers that move large objects up and down the room.

The tour is less like a history lesson, and more like an interesting tale from your great-great grandfather. The story is part told through personal accounts, and a large focus is on the funny tidbits and idiosyncrasies of the ship’s life.

For example, the whole of Bristol turning out to wave off the ss Great Britain on her first voyage, before she embarrassingly ended up stuck in the harbour for another year because they had forgotten to widen the docks.

Or the story of two detectives who had chased a criminal on board and by the time they realised he had got back off the ship, they were trapped on a 70-day voyage to Australia.

The telling of the tale is extremely thorough – from ship logs and personal diaries, to a disturbingly well-preserved half-eaten biscuit one passenger had kept as a souvenir.

There is also a healthy collection of Brunel’s personal possessions, including a “last cigar”, a part-smoked cigar believed to have belonged to the man himself.

Once you’ve passed through the museum, you finally get to board the ship and that’s when you truly enter another world. Eerily lifelike models are positioned around the reconstructed cabins. So lifelike in fact, I almost asked two for a photo (for this, I choose to blame the low-lighting).

As you walk around, you have a choice of audio guides to listen to, including one for children which lets them search the ship for the captain’s missing cat.

I chose the tour from the perspective of third-class passengers (one of the most interesting things to note about the ship is the stark contrast between the first class and lower class areas). The audio tour is made up entirely of real-life accounts of passengers, taken from diary entries and letters.

There’s also dress-up room aboard the ship, where children – and adults – can get dressed up in Victorian clobber and really feel the part.

The finishing touch for me was the memory-triggering smells about the place. From the bakery came the smell of fresh bread; from the lower decks, the unmistakable scent of horse manure; all contributing to the sense of actually experiencing the ship as it was in its heyday.