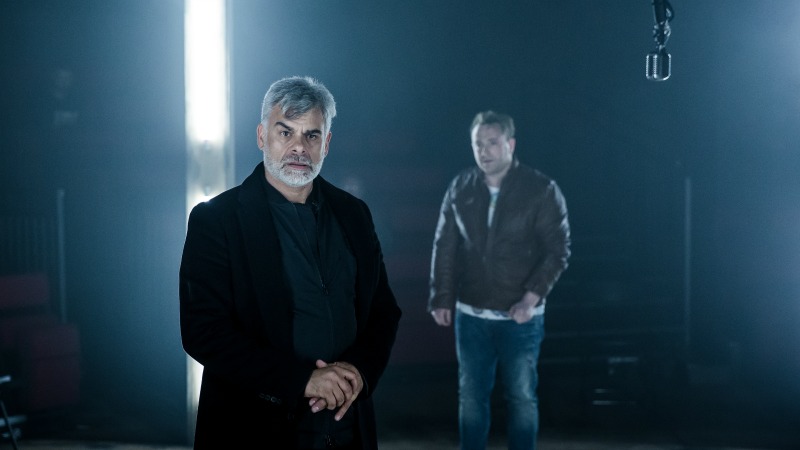 Over the 17 years that Shakespeare at the Tobacco Factory (stf) has been gracing the Bristol theatre scene, the touchstone of its productions has been simplicity. The company’s USP is that it presents an unadorned Shakespeare, without artifice or directorial conceits. It allows the oft-abused text to breathe and to live. Unfortunately, it appears that someone forgot to give guest director Richard Twyman the briefing.

The perfect illustration of Mr Twyman’s zest for reinterpretation comes in Act II, scene 2 of this stf/Tobacco Factory Theatres co-production. There is a dance. To pounding rock music. By people wearing gas masks. It’s very contemporary. And it’s not in the original script. It adds nothing to the story or the clarity. It feels like it’s there for the sake of it. Like the boxing MC mic that drops from the ceiling in certain scenes, it fulfils no role other than bringing a ‘modern twist’ to the piece.

There is also a clumsy attempt to lend contemporary relevance by seeking to flag up that Othello is a Muslim. So chunks of Arabic are inserted into the script, and Othello ostentatiously waves his crucifix at moments when the audience apparently need to be reminded of his non-Christian origins. It’s all unnecessary, because the otherness, the demands of assimilation and the outsider’s struggle with prejudice are there in the text. All a good director has to do is tease them out in the delivery.

Mr Twyman’s introduction of his own little touches also appears to have distracted him from the director’s prime role: to study the performances and to make that sure they work, both within themselves and with one another. Abraham Popoola’s Othello, although powerful in his jealousy-driven madness, does not convince. As an authority figure, he does not come across as a man that men would follow and die for, and it is hard to believe that a hard-bitten general would prance about with his beloved like a lovesick fawn.

Although, when it comes to prancing, Desdemona (Norah Lopez Holden) is definitely top of the class. Whilst Lopez Holden’s youthful looks will hopefully give her a great career of playing subteens well into her 30s, it does mean that the decision to present Desdemona as a giddy little sprite and dress her like an 11-year-old does bring something weirdly Lolita-ish to the central relationship. She’s so constantly bright-eyed and bushy-tailed that at one point – when she started dancing on the table – an audience member was heard to murmur “if Othello doesn’t strangle her, I will soon”.

Norah Lopez Holden as Desdemona and Abraham Popoola as Othello. Pics: The Other Richard

Even Mark Lockyer’s masterful Iago, a serpent-smooth manipulator and deceiver with a resigned smile playing on his lips, has moments of misjudged tone. Iago may be mad, but his madness is that of a controlled paranoid sociopath – yet occasionally, in moments of soliloquy, he’s presented as a Shakespearean loon, fit for a straitjacket. Lockyer’s performance is, nonetheless, undeniably the strong central pillar of this production.

These are all performance aspects that the director should have picked up and rectified. That, ultimately, is the director’s job: to be the eyes of the audience in the rehearsal room and to help the actors make it the finest, clearest and most coherent piece possible. Auteurish flourishes are bells and whistles which – as stf have proved more than almost any other theatre company – are completely unnecessary.

This has the feel of a decent university production of Othello. But stf’s reputation means that a production of one of Shakespeare’s finest plays should be better than this, and purer. When your main thought when coming out of the theatre is wondering why on earth soon-to-be-murdered Desdemona was doing yoga wearing an iPod in her bed chamber, and not just sleeping like Shakespeare specified, there’s something wrong.