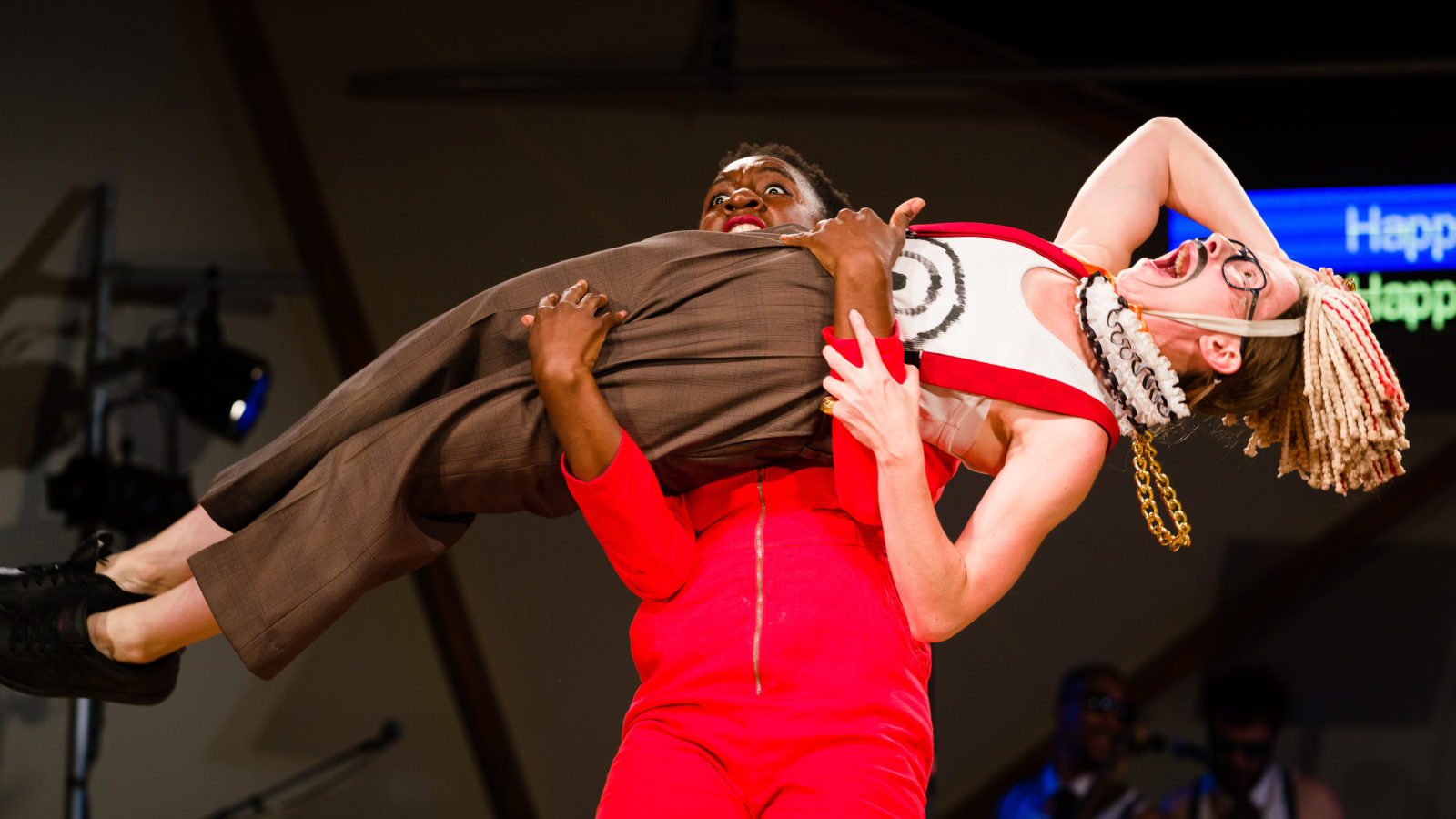 Kneehigh’s reworking of Alfred Jarry’s 1896 play Ubu Roi as a ‘singalong satire’ should be brilliant.

After all, this is Kneehigh: a hotbed of theatrical creativity who wow audiences with their highly inventive and full-on productions. They even have history when it comes to reworking a bleak story of immoral powerlust with a modern soundtrack: their brilliant Dead Dog in a Suitcase took the Beggars’ Opera and gave it a contemporary, highly amplified and utterly riveting makeover.

And to add to the promise, UBU! is not being performed in a conventional theatre, but in the cavernous shed of the Marble Factory, a setting more familiar to hardcore clubbers than genteel theatregoers. The plywood staging towers over the audience, who ebb around the bare concrete floor amidst the girders. It feels raw, exciting, new. The cast is packed with highly talented actors and musicians with shedloads of experience of producing thrilling work that makes you remember why you love going to the theatre.

It should be brilliant. But sadly it’s not. 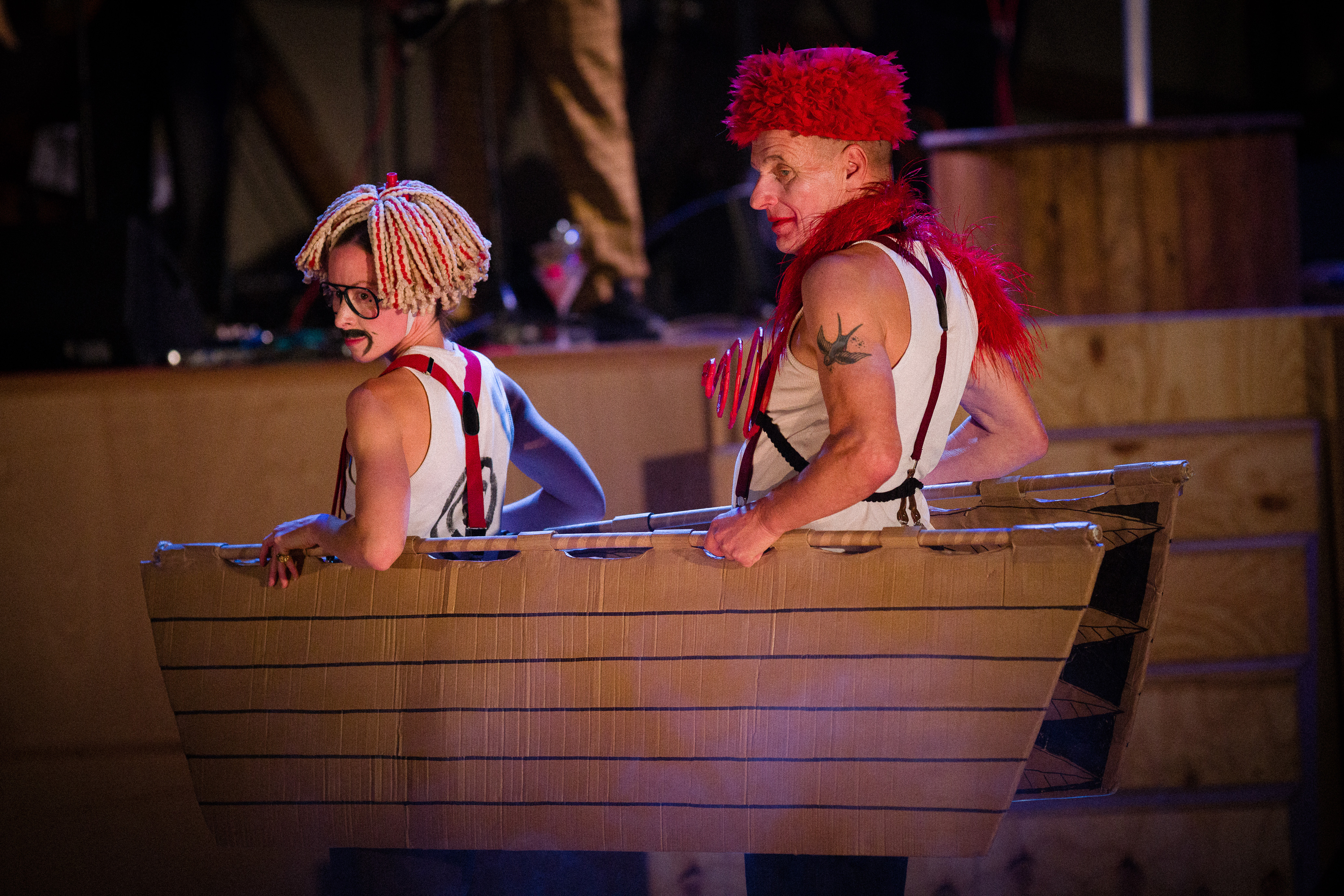 Katy Owen and Mike Shepherd in Kneehigh’s UBU!: “It should be brilliant. But sadly it’s not.”

For the sake of balance, it should be noted that a lot of the audience have a lovely time. There is a lot of hardcore audience participation, from singing along to a variety of well-known hits to playing some very physical party games. If what you’re looking for from a night out is mass karaoke and the sort of games that you’d find as an interlude at a primary school disco, UBU! is definitely worth attending. There are a few good jokes. And the performers are very skilled at what they do. The problem is that what they do is not very much.

Kneehigh describe themselves as “a band of brave, skilled storytellers”. They are certainly skilled, and they are certainly brave – but there is very little story here. What plot there is consists of no more than a few sketchy snippets from Jarry’s already fairly thin storyline about the rise to power of a nobody called Ubu, his period of misrule and his subsequent downfall. But the storyline is stripped beyond the bone. Anyone unfamiliar with the source will puzzle about the sudden appearance of a magic bear, for example.

The play gives no motivation or personality to any of the characters. Writer Carl Grose suggests that Ubu is “cruel, nonsensical, cowardly, aggressive … a howling, hysterical metaphor for greed, lies and corruption”. But Katy Owen’s Ubu is none of those things. This Ubu in his weird dreadlock wig and outdated glasses is owlish, gormless, a strange jumble of ticks and varying vocal inflections signifying nothing. 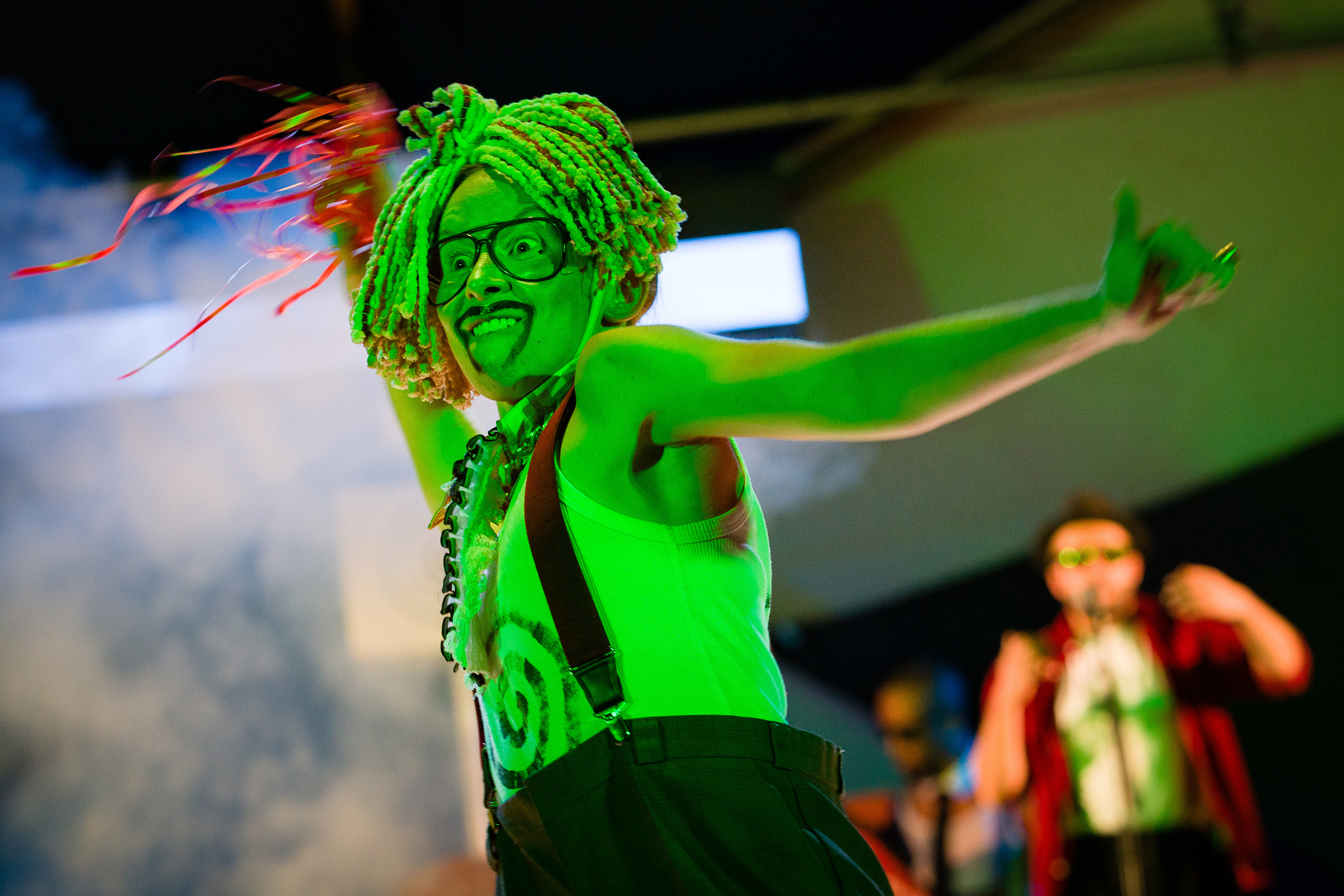 Katy Owen as Ubu: “a strange jumble of ticks and vocal inflections signifying nothing”

This is not a “rampaging Id” barrelling his way to the top of the pile through sheer bluster and barefaced lying. This Ubu is blank, and does not even serve as a void onto which we can project our own prejudices. He is an entr’acte clown, not an eponymous anti-hero. And there is no real attempt to seize the glaring opportunity offered by today’s politicians and draw parallels between Ubu’s rise and that of the corrupt, mendacious, power-hungry leaders who may currently be appearing in your newsfeed.

The other characters, whilst more strongly defined, still lack anything tangible to engage an audience, either positively or negatively. They are ciphers designed merely to move the story forward. 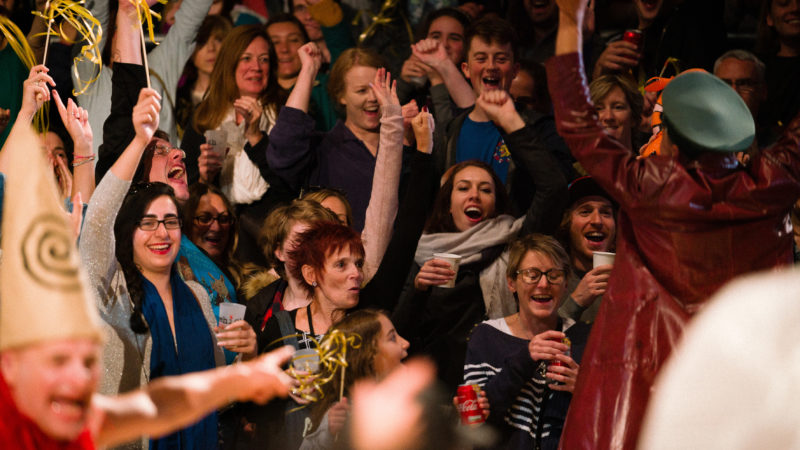 Which would be fine if there was a story. But it feels as though UBU!’s creators have become so enraptured with the idea of breaking boundaries, smashing the fourth wall and fully engaging the audience in voice and actions, that they have lost sight of what theatre is at heart: storytelling. All that is on offer here is something which feels depressingly like the sort of rambling, pointless ‘play’ your kids insist on staging for you on a rainy Sunday afternoon.

However, there is one moment in this show when everything comes together: the narrative, the crowd singing, the audience engaging with the actors. It all works in harmony, and it gives you goosebumps: the magic of theatre at its finest. The problem is that that moment is literally the final minute of the show. The question is whether it’s worth standing through two hours and 29 minutes of ‘not the magic of theatre’ to get there.