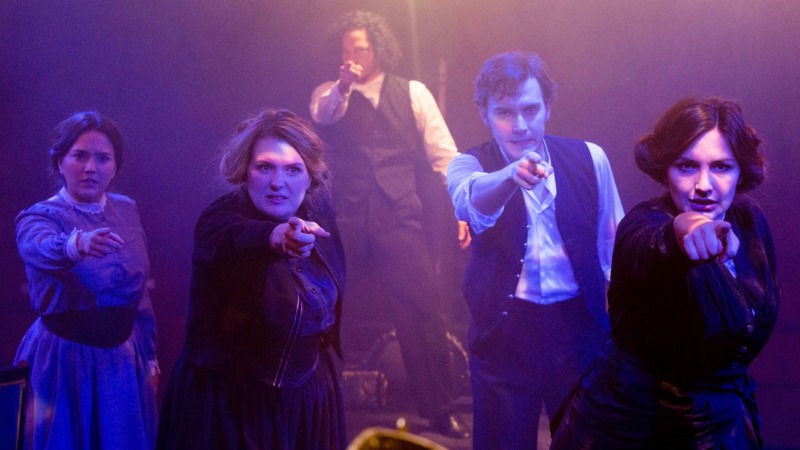 Opera Project’s production of Don Giovanni – the story of a sex-obsessed aristocrat and his ultimate downfall into the flames of Hell – is considerably less heavy-going than the synopsis might suggest. George von Bergen’s Giovanni is a smooth charmer, a perfect sociopath whose truly unpleasant and obsessive nature only starts to filter through gradually. His servant Leporello, as presented by Benjamin Cahn, offers both humour and anguish in a depth which goes way beyond the usual ‘comic servant’.

The plot and characterisation are undeniably a little shaky in places: but if Don Giovanni were all about the words, it would be known as Da Ponte’s Don Giovanni, not Mozart’s. Ultimately, the killer ingredient is the music. With a small ensemble tucked into the corner of the Tobacco Factory Theatre and some fine singing voices on the stage, this production offers an excellent opportunity to enjoy some lovely Wolfgang Amadeus tunes.

They are delivered with substantial – even overwhelming – force. Opera singers do not train to perform in small rooms: their eyes are set on filling La Scala or the New York Met. Those trained voices deployed in a confined space like the Tobacco Factory creates an astounding wall of sound. It’s almost incomprehensible that so few people can make such a big noise. When Donald Thomson (Il Commendatore) lets rip in the final scene, his bass notes vibrate inside the audience’s ribcages like a session of heavy dubstep.

But the unique aspect of opera is, of course, that it’s both singing and acting at the same time. The pleasure of the musical performance may be great, but in some way means nothing without a corresponding theatrical experience to move the audience in a different way. This production does manage to hit those dramatic buttons as well, aided by the lyrics being sung in Amanda Holden’s English translation.

Whilst some of the cast do favour the classic operatic form of emotional expression – reeling, writhing and fainting in coils – others (particularly Laura Ruhi Vidal (Zerlina), Cahn and Von Bergen) rise above the hyper-melodramatic to bring a more actorly depth to their performance, creating a delicate chiaroscuro of emotion with a single look. Vidal is particularly impressive, with a constant focused performance which has a true actor’s intensity and is perfectly suited to the intimate surroundings of the Tobacco Factory.

Chamber opera is an unusual experience for those more accustomed to conventional theatre. Yet this production offers a story which manages to engage on a theatrical level whilst also incorporating an added layer of world-class music. It’s worth stepping outside your comfort zone for.