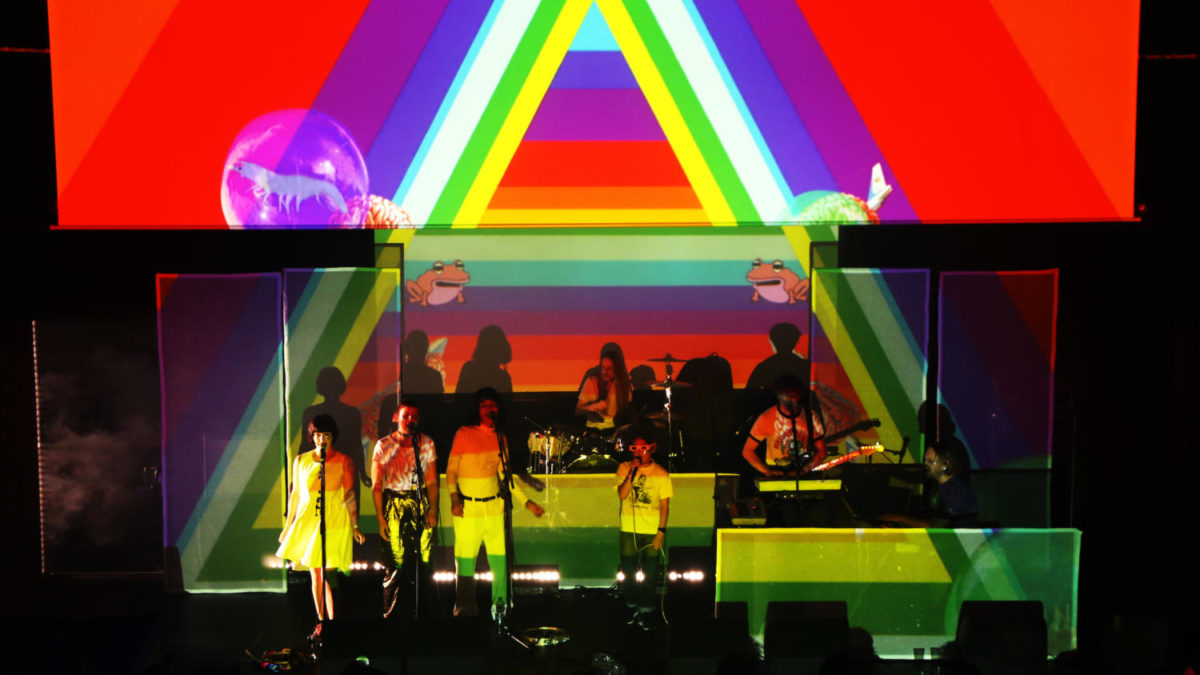 It was Superorganism’s NPR Tiny Desk Concert that catapulted the group to the top of my must-watch list. While their self-titled debut is a celebration of their wholly unique and danceable indie-pop their time with NPR shone a spotlight on their mischevious creativity. Over the course of three songs, a plethora of everyday percussive sounds are woven into hooky melodies – the crunch of an apple, the fizz of a can opening, a straw slurping and watching it makes me grin from ear to ear.

There weren’t any apples to be seen when they played SWX, but they brought along a flawless pop performance.

Keeping the night firmly in the grounds of the quirky are Japanese four-piece, Chai. Taking to the stage in a set of matching pink pyjamas this riot grrrl group pack in punchy melodies with enough experimental moments to keep things interesting. While their high pitched vocals took a second to adjust to it wasn’t long before the crowd starts grooving – and giggling along.

The group twist between pop, funk and punk while keeping their lyrics empowering, arguing for individuality and self-love and calling for a ‘N.E.O kawaii’ – a new style of cute that acknowledges uniqueness. While it’s certainly not for everyone it’s undeniably infectious and a Japanese cover of Dancing Queen proved to be something I never knew I needed.

From the moment that Superorganism arrive on the stage, it’s clear that their backbone is in performance. Gliding out from the wings in shimmering cloaks, half of the collective hold onto glowing orbs while the others play the triangle in a cult-like ceremony and jump straight into, SPRORGNSM.

The band’s eighth member, while absent from stage is an immediately noticeable highlight, for the entirety of the bands set a meticulously choreographed visual arts show plays over and behind the group, fitting in seamlessly with their music and providing extra moments for the theatrical – phone alarms shaking on screen wake up the band and at another time a video game backdrop has the group tapping on their phones.

The contrast between the groups charming and energetic appearance and frontwomen Orono’s deadpan, detached delivery is at the forefront in a live setting. The tight funk of, In the Night Time to the grungy pop amalgamation of Nobody Cares is all held together through the disparity between joyful pop and apathetic vocals, with each being too much without the other.

The group close out the show by inviting ‘posh’ people onstage for a dance invasion. It’s a celebration of the group’s peculiarity and eccentric style, balancing the chaos of numerous noises and samples with huge choruses and contagious hooks. It’s been an enchanting evening and proof that Superorganism bring along a smorgasbord of fun, imagination and catchy hooks – all the things that make live music so incredibly addictive.