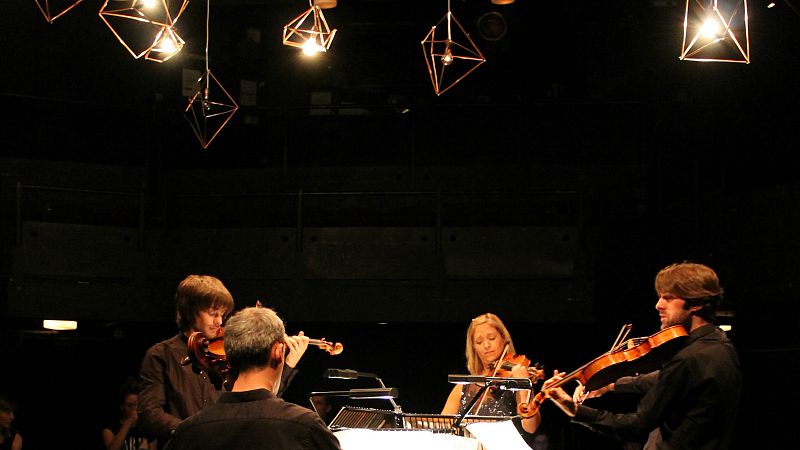 It doesn’t get much more personal than holding someone else’s heart in your hands. But that’s what happens at the performance on Thursday evening by the Sacconi Quartet at the Old Vic as part of the Bristol Proms.

“I give you my heart,” said celloist Pierre Doumenge, placing a pulsating wooden box carefully into my hands at the dress rehearsal. He explained that he was wearing a cardiac monitor, which would transmit his heartbeat directly into a ‘chestahedron’ throughout the performance.

The chestahedrons were inscribed with the musicians’ names and respective instruments.

As Pierre began to play, I instantly felt his pulse quicken. It was a strangely intimate sensation, feeling the pace of his heartbeat change as the show went on. When the quartet upped the tempo, their hearts followed, with the whole experience made all the more immersive by the flashing lights above that were also responding to their cardiac monitors.

The Sacconi Quartet are known for their forward-thinking approach to classical music, and as a group are committed to coming up with new ways to engage their audiences and bring them closer to the music they are so passionate about.

This show started as a musical experiment at the Watershed called Hack the Quartet, where a group of coders and programmers used robotics and responsive lighting to mimic the heartbeats of the musicians as they played.

The project was so successful that they decided to turn it into a full-scale production.

The unique nature of the show made for a refreshing twist on the traditional classical performance, and the Sacconi Quartet have been undoubtedly successful in their attempt to bring the audience closer.

Heartfelt will be performed at 6pm on July 30 at Bristol Old Vic, for tickets and more info go to www.bristololdvic.org.uk.