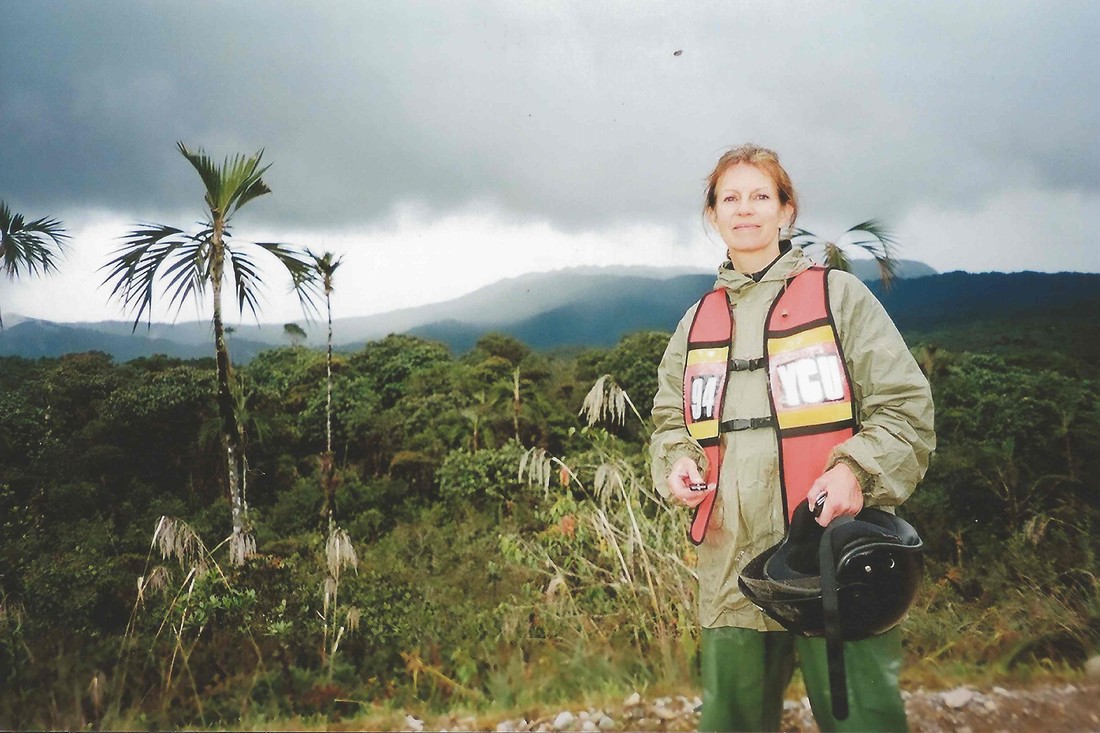 Jacqui Furneaux was a nurse for many years before she set out on her globe-trotting adventure.

“I’m a local girl,” she tells me when we meet to discuss her new book Hit the Road Jac!. “I was born in Yatton, and moved to Weston-super-Mare when I was seven, and then to Bristol to do my nurse training. I got married and had two daughters.

“We had a very hot summer in 1976, and my husband came home from work with a motorbike. He said ‘Have a wiz around the streets on this’, and I thought ‘I’m not doing that!’. But I did, and I was hooked on motorbikes thereafter.”

This was the beginning of Jacqui’s life-long love passion for motorcycling. “I went to do my training with my brother-in-law,” she says, “and I’ve had a motorbike practically since then. Every spring I’d ride into a mechanic and ask them to get it ready for the summer.

“We used to take our daughters camping in France. Never a really long holiday but I’d always wanted to travel. I thought my husband and I would do it together when we retired, but it didn’t work out like that and I ended up doing it on my own.” 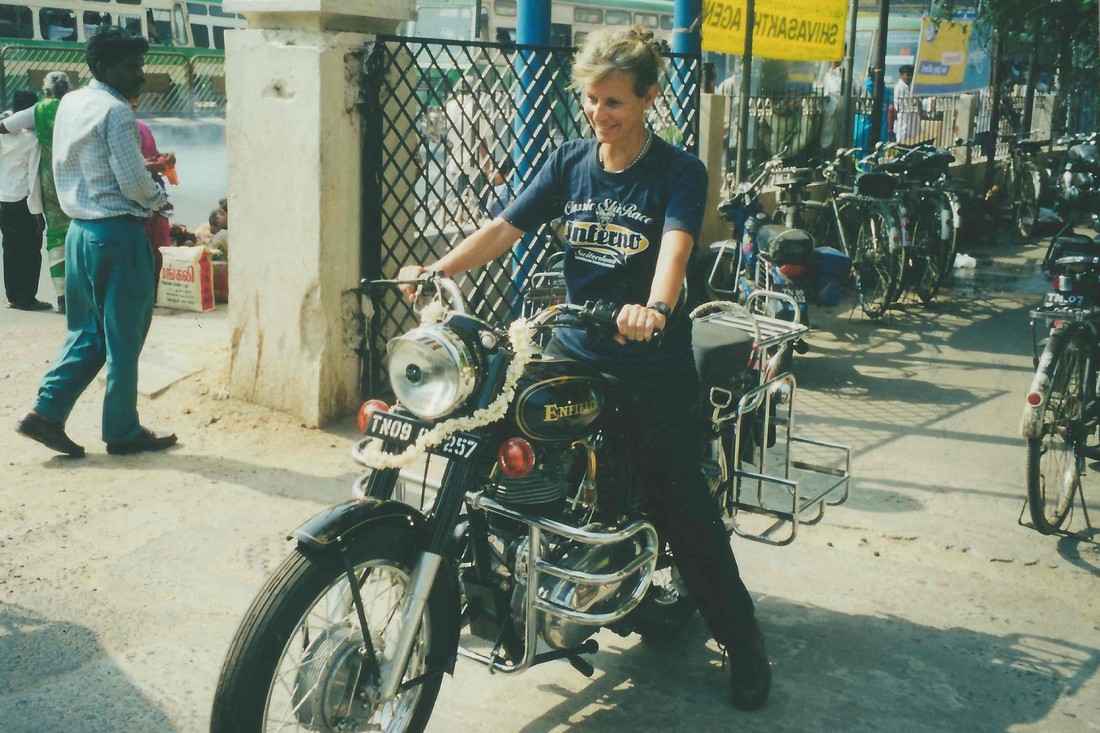 Jacqui with her Enfield Bullet in India

After many years of happy marriage came to an end, Jacqui felt it was the right time to pursue her dream of travelling. “I went into the Trailfinders in Manchester and I said, ‘Don’t let me out of here until I’ve booked myself on a trip!’ The travel advisor said to me, ‘Oh, are you doing a Shirley Valentine?’

“I spent a year backpacking and managed to get through Cambodia without stepping on a landmine. One day a Dutchman I was travelling with said ‘Get a bike like mine and we can travel together’, so I just took some money with me to India and bought one.”

On her fiftieth birthday in Chenai, Jacqui purchased an Enfield Bullet. This beloved vehicle would see her through seven years of adventures around the world, and over a decade beyond that back home. She initially thought she’d only ride it for six months.

“After a lifetime of responsibility, it was lovely to just drift along with somebody else (my Dutch friend) making all of the decisions,” she recalls. “Some days we’d use a map, and other days we’d just go where our noses led us. We gradually started going east.

Jacqui wanted to see New Zealand and South America, but her travelling companion had other ideas. “We got as far as Australia and the Dutchman wanted to stay there so I thought, ‘What do I now?’ I decided to carry on on my own.

“There were vast distances of straight roads, no traffic, absolutely nothing – and I found my mind replaying things from my childhood that I had never thought about. I started to see things in a different way.”

Jacqui found pleasure in not being dependant on somebody else. “When the bike went wrong, I knew I could have a go at fixing it. I learned how to be with people, and the biggest lesson I learnt was how kind people are all over the world, always trying to help you in a fix.”

I ask Jacqui if her daughters were worried about her being out travelling alone. “I’ve always asked them this,” she admits. “They say they always knew I was a bit mad and that I’d do something like this. They didn’t worry about me after I’d spent my year backpacking.

“I thought I would be exploring more of South America, but after six years one of my daughters came to spend time with me in Ecuador, and said, ‘Mum, you’ve been on the road for six years now, why don’t you come home?’ I thought it was a lovely thing to ask, so I went north and came home through Columbia.” 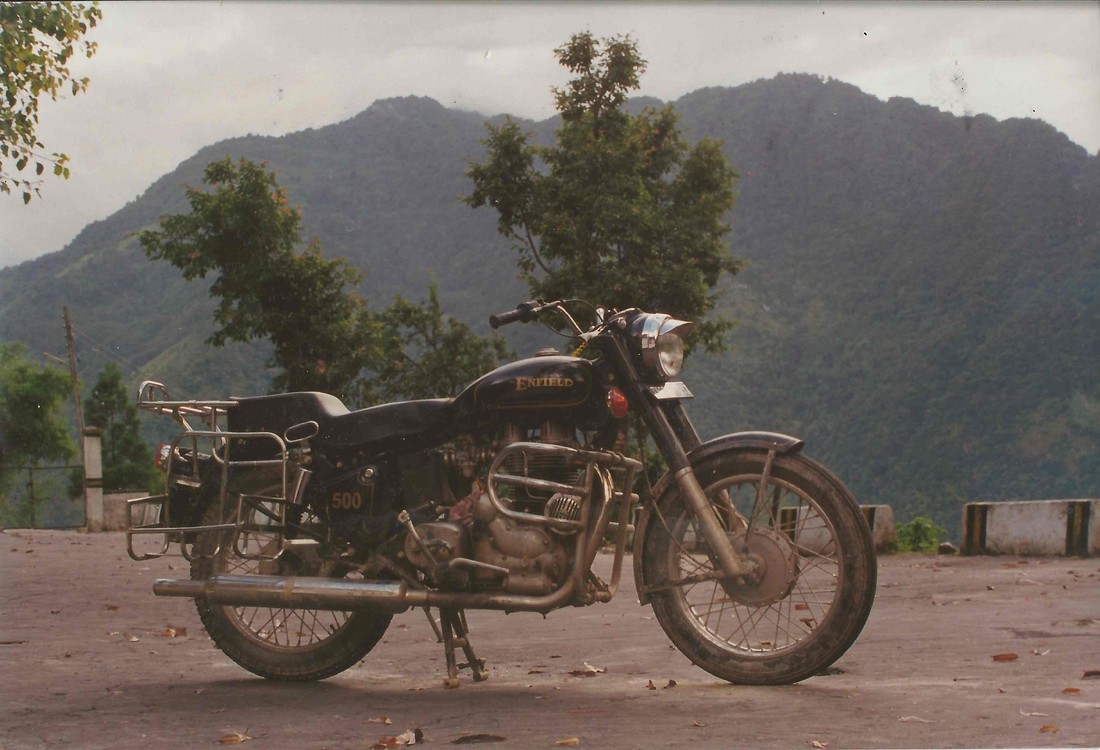 On the journey back, Jacqui found herself in an extremely dangerous situation when the captain of the boat she was on threatened to cut her up into little bits and throw her overboard. “I was in someone else’s hands and at the mercy of the elements. I was scared – I didn’t feel at all brave – but when I was writing it later, I could see the funny side of things. I have an idea that things always work out. I trusted that it would work out.”

And indeed it did work out – though the return home to Bristol was a strange one. “I was excited about coming back, but it was very hard. I felt like a fish out of water, like I had just arrived from outer space. The city has changed so much. It’s even more lively and there’s so much going on, lots of innovation and creativity.”

In 2014, Jacqui began the process of turning her many travel diaries into Hit the Road Jac! – her new book. “I’d written one or two articles, and when I saw one in OVERLAND magazine I thought, ‘Oh! Maybe I can do this book’. I wanted people to know how much fun it was. I was very accurate – I haven’t exaggerated anything.”

Jacqui’s family helped out with the writing process. “My daughters read it as I was writing it. One would say, ‘Mum you can’t put that!’ and that other would say, ‘Yeah, put that!’. I read some of it out to my brother as well, before he died last month. At the end of the last chapter he said, ‘Don’t change a thing’.” 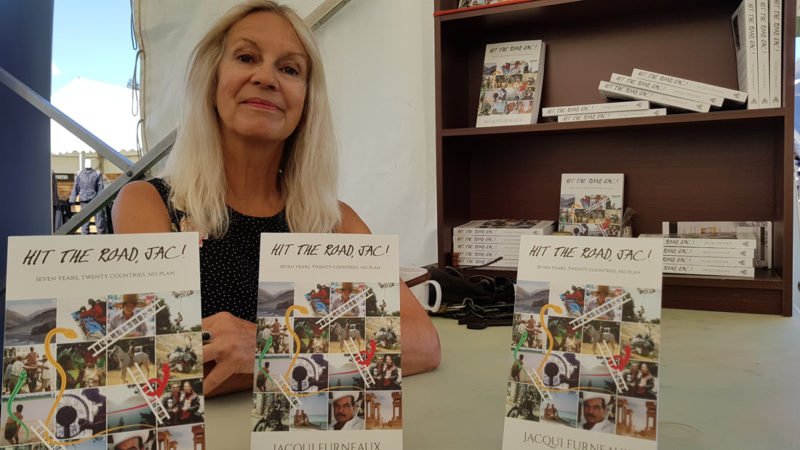 Jacqui with her travel memoir

I ask Jacqui if she ever regretted embarking on her journey. “I never regretted making the decision to go,” she instinctively responds, “It had its ups and downs, which is why the front cover of the book has a snakes and ladders board, but I was having a great time – even when I broke my leg, and when the Dutchman decided to go on his own.

“Even aimless travelling has a routine. Each day you look at the map and think ‘I’ll go to that place’, and then you park your bike, have a look around and have something to eat. It’s not that I lacked direction, cause every day was fascinating, but I did think sometimes, ‘What am I doing this for?’

“But I think that everyone should do something that shakes you up a bit and makes you think, because that’s how you grow. Quite a few people have contacted me since my story and said they’ve been inspired by me, which is lovely to hear. One bloke said he gave up his job the next week and set off on his motorbike.”

For more info and to book tickets, visit www.stanfords.co.uk/event-hit-the-road-jac-jacqui-furneaux