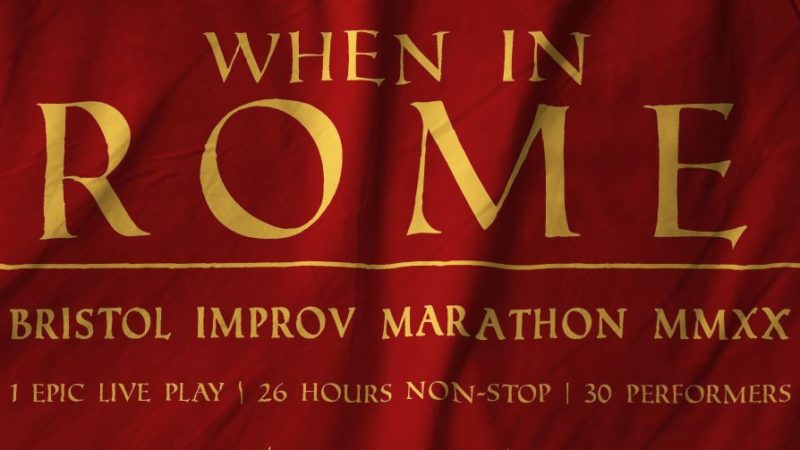 Now in its sixth year, Closer Each Day Company in association with Bristol Improv Theatre and The Wardrobe Theatre presents Bristol Improv Marathon! For a staggering 26 hours a team of intrepid performers will create an entirely improvised, entirely unscripted play using nothing but their skill, imagination and a hefty dose of caffeine. The show brings together performers from all across the city and includes stars of hit shows such as Closer Each Day: The Improvised Soap Opera and Murder, She Didn’t Write by Degrees of Error!

2020 theme: WHEN IN ROME (XXVI HOURS BC)
It is the age of empires and emperors, and the western world revolves and converges on one thriving metropolis: Rome. The Forum hums with the plots and machinations of power-hungry Senators and their hand-wringing advisors, while the marketplace buzzes and jostles with wealthy merchants and struggling farmers. To the East, the still-warm sand of the Colosseum is splattered with the blood of heroic gladiators, as the jeers and cries of the masses echo from pillar to pit. The city streets are a medley of shrines and gutters, Roman legionnaires on leave spilling out of every taverna, while aspiring poets sing their songs for pennies on every corner. Meanwhile on the Palatine Hill, the lofty vestal virgins perform their sacred rites to protect the city walls. Home to plebeians, politicians, scholars and soldiers, Rome is the original toga party – and everyone’s invited.

“An impressive display of the actors sheer stamina and creativity. It was extremely entertaining to watch.”
Stage Talk magazine