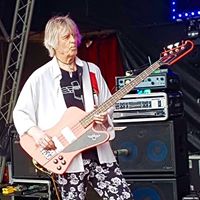 Previously the lead vocalist in rock band Wishbone Ash in the 1970s, Martin Turner has now re-invented himself as a solo artist with his hard rock albums released over the past 25 years. His touring activities are branded as Martin Turner (Ex-Wishbone Ash) due to him still performing their progressive rock music.