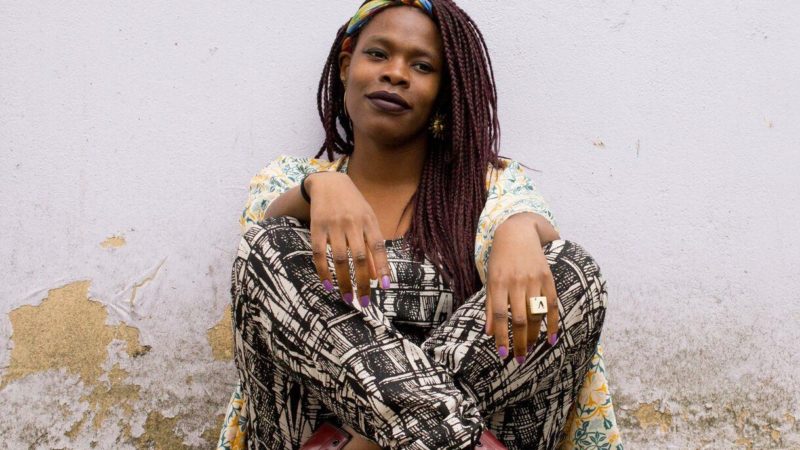 “Talk all things poetry, books and stories. Come and have a bespoke poem written, get book recommendations, or even tips on your own creative writing.

“People of all ages welcome. It’s free and there is no need to book”

Vanessa Kisuule is a writer and performer based in Bristol. She has won over 10 slam titles including Farrago Schools Out Slam Champion 2010, Bang Said The Gun Award, Poetry Rivals 2011, Next Generation Slam 2012, Slambassadors 2010 and South West Hammer and Tongue Slam Champion 2012 and most recently The Roundhouse Slam 2014, Hammer and Tongue National Slam 2014 and the Nuoryican Poetry Slam in New York. She was the recipient of The Jerwood Micro Arts Bursary in 2017 to undertake extensive dance training and also received the Leverhulme Arts Scholarship in 2017 from Bristol Old Vic.

She has performed at an array of renowned poetry events and venues such as The Royal Albert Hall, The British Library, Blahblahblah at the Bristol Old Vic, Tongue Fu and Chill Pill in London as well as many festivals including Shambala, WOMAD, Wilderness, Secret Garden Party and Glastonbury.

She has worked with the Southbank Centre, RADA, The Bristol City Council, Knee High Theatre and Warner Music and had her work featured on BBC iPlayer, BBC Radio 1 and Radio 4’s Woman’s Hour, The Guardian, Huffington Post, The Guilty Feminist Podcast, Gal Dem Magazine, Dazed and Confused, Blue Peter, Sky TV and TEDx in Vienna. She represented the UK in two European Slam Championships in Sweden and Belgium, completed a ten day tour around Germany in 2015 and spoke at the Global Forum of Migration and Development in Bangladesh in 2016.

She has also performed in Finland, Barcelona, Oslo and Brazil. Her poetry collections, Joyriding The Storm  and A Recipe For Sorcery are both published by Bristol-based Burning Eye and her work was Highly Commended in The Forward Prize Anthology 2019. Her one woman show SEXY toured with the kind support of Arts Council England, Bristol Old Vic and Camden People’s Theatre. She is the Bristol City Poet for 2018 – 2020.