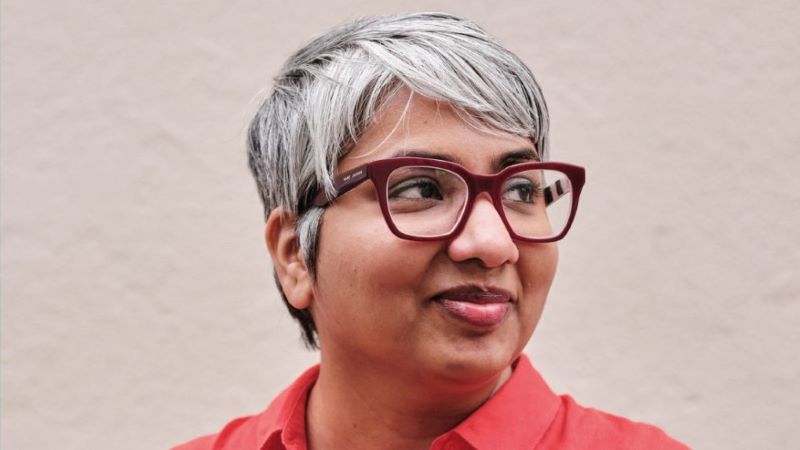 Deepa Anappara reads from and introduces her widely-anticipated, acclaimed debut novel, Djinn Patrol on the Purple Line. She is the winner of several awards, including 2nd prize in the 2013 Bristol Short Story Prize.

“Nine-year-old Jai watches too many reality cop shows, thinks he’s smarter than his friend Pari (even though she always gets top marks) and considers himself to be a better boss than Faiz (even though Faiz is the one with a job).

“When a boy at school goes missing, Jai decides to use the crime-solving skills he has picked up from episodes of Police Patrol to find him. With Pari and Faiz by his side, Jai ventures into some of the most dangerous parts of the sprawling Indian city; the bazaar at night, and even the railway station at the end of the Purple Line. But kids continue to vanish, and the trio must confront terrified parents, an indifferent police force and soul-snatching djinns in order to uncover the truth.”

Deepa Anappara grew up in Kerala, southern India, and worked as a journalist in cities including Mumbai and Delhi. Her reports on the impact of poverty and religious violence on the education of children won the Developing Asia Journalism Awards, the Every Human has Rights Media Awards, and the Sanskriti-Prabha Dutt Fellowship in Journalism. A partial of her debut novel, Djinn Patrol on the Purple Line, won the Lucy Cavendish Fiction Prize, the Bridport/Peggy Chapman-Andrews Award and the Deborah Rogers Foundation Writers Award. She has an MA in Creative Writing from the University of East Anglia, Norwich, and is currently studying for a PhD on a CHASE doctoral fellowship.

‘Djinn Patrol is storytelling at its best.’ Anne Enright, Booker-prize winning author of The Gathering

‘A wonderful, energetic book filled with humour and pathos. Charming, sensitive and deeply moving’ Nathan Filer, Costa Prize-winning author of The Shock of the Fall

‘A moving and confident novel about the preciousness of life. The storytelling is distinctive and immersive’ Nikesh Shukla, author and editor of The Good Immigrant

‘A magnificent achievement: the endeavours of the Djinn Patrol offer us a captivating world of wit, warmth and heartbreak, beautifully crafted through a child’s unique perspective’ Mahesh Rao, author of The Smoke Is Rising

‘The children at the heart of this story will stay with you long after you turn the last page… a wonderful debut’ Christie Watson, Sunday Times bestselling author of The Language of Kindness