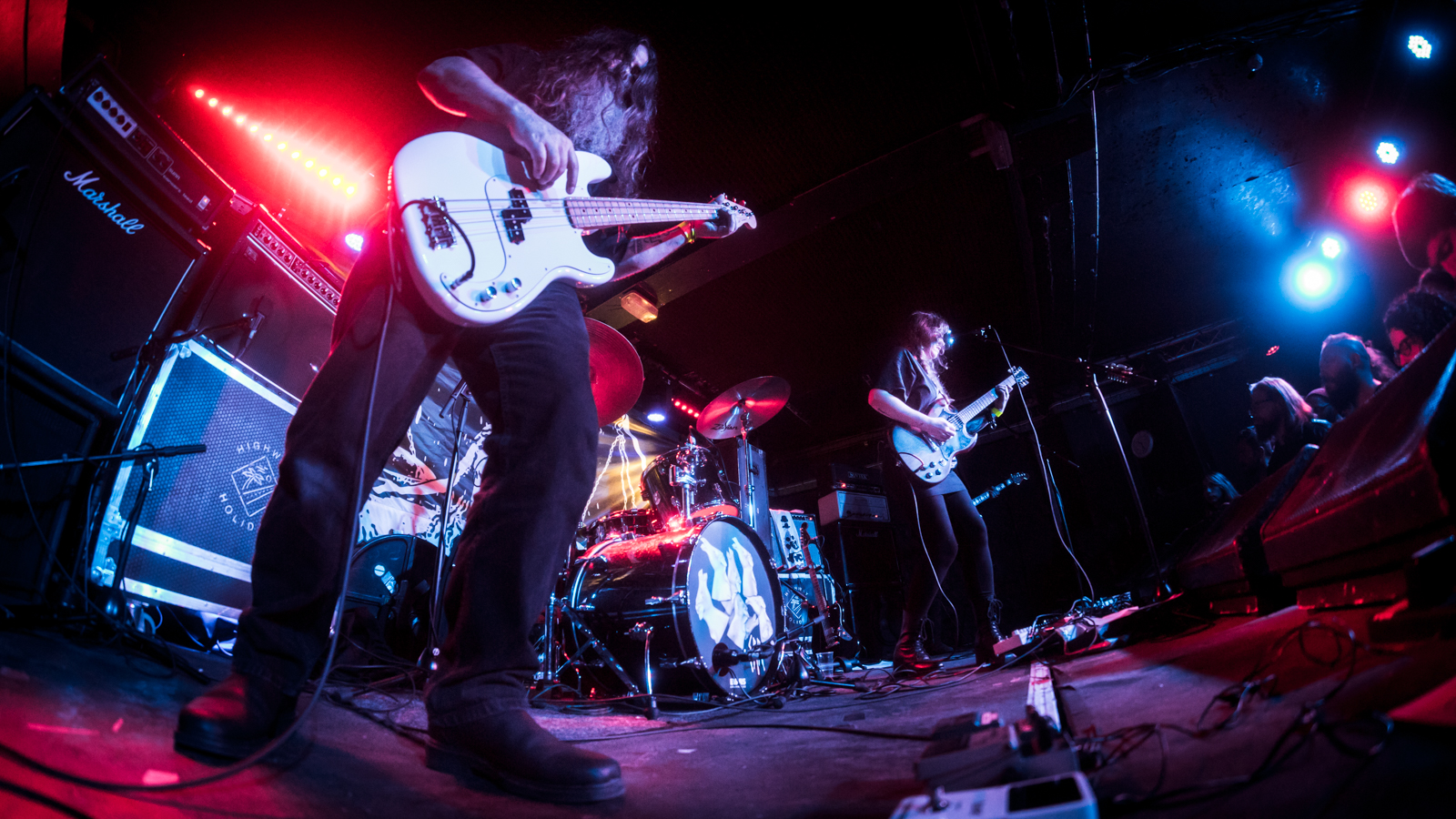 Saying Jo Quail plays the cello is a bit like saying Lemmy dabbled occasionally in recreational drugs and enjoyed a Jack n Coke now and again. Jo Quail plays the fuck out of the cello. She did so over four and a half (partially improvised) lengthy instrumentals, mesmerising a nearly full room. Not everyone entered the venue a fan, but every person left the venue converted. 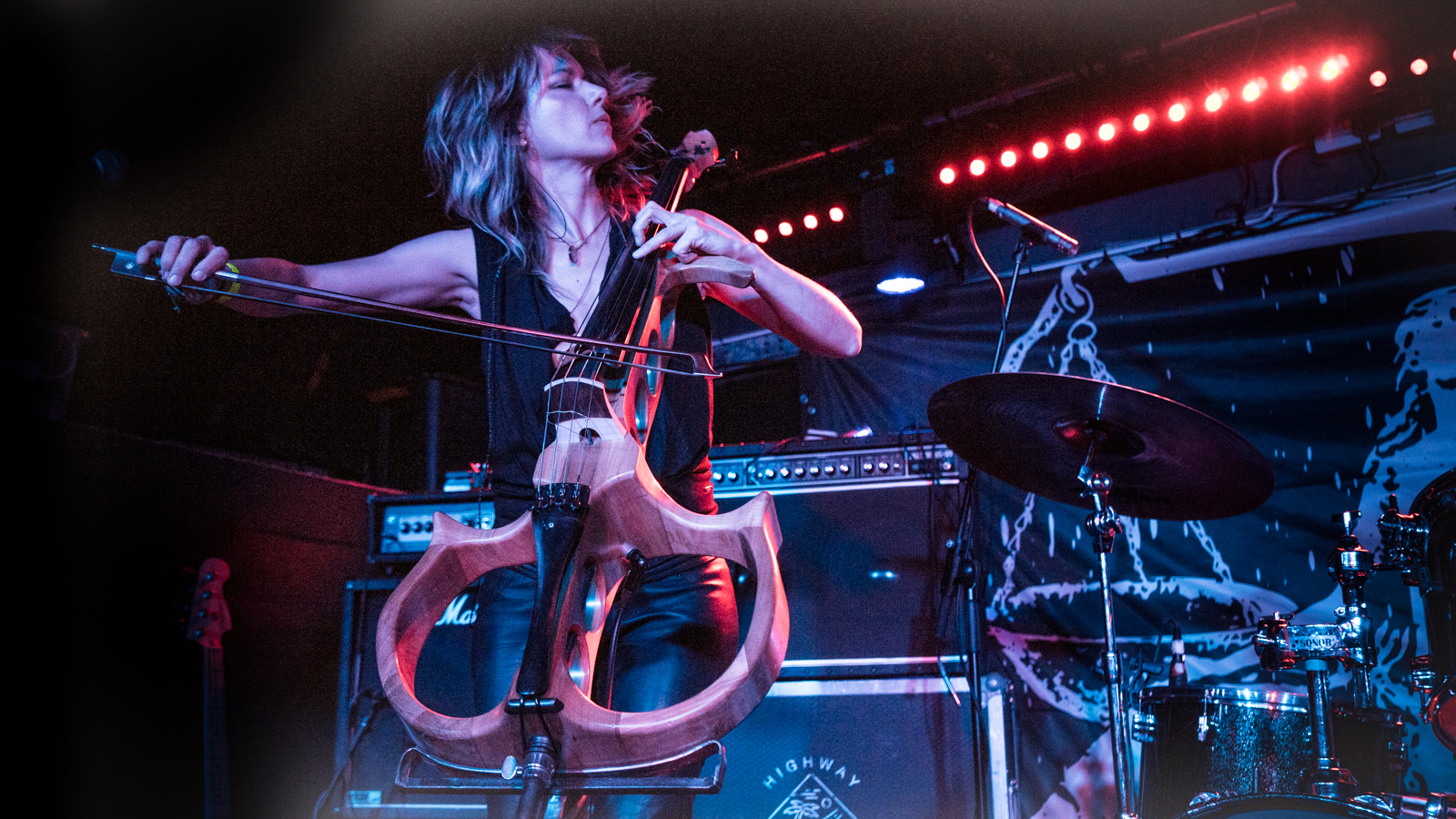 She used the cello to feed her sample and loops pedals: creating beats, rhythms and melodies, which she then used as a launch pad for solos and lead cello runs (is that a thing?). She created towering edifices of sound that conversely had passages of tremendous drive and pace. Incidentally, said cello may have looked like it was designed by H R Giger but was actual hand made by Dave in Fort William. 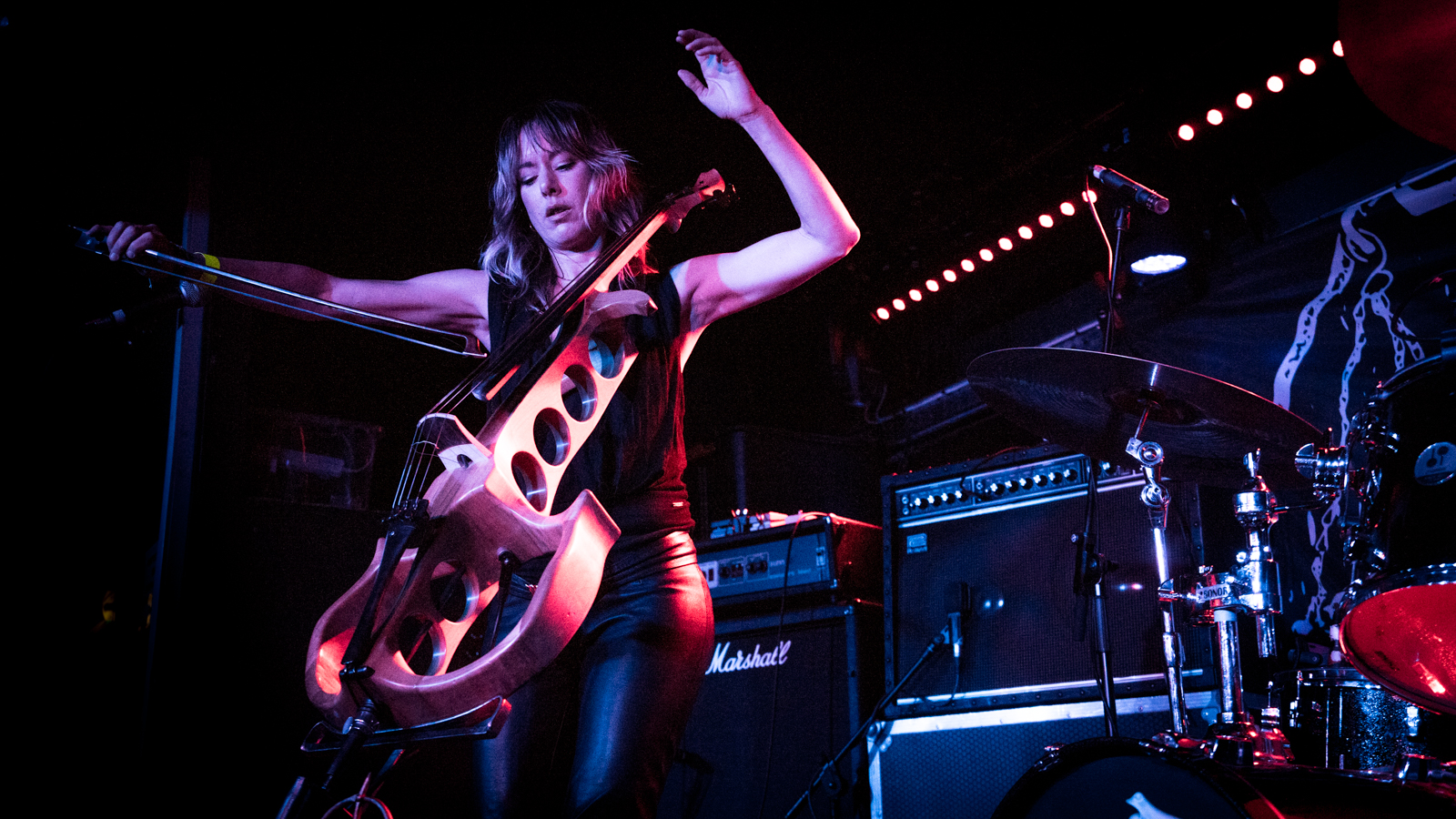 Set opener White Salt Stag set the tone, Quail beating out a beat or two on the neck of her instrument, those loops then supplemented with some deep, low bowed melodies building up a somewhat mournful foundation. Then she picked out themes and lighter melodies over the top – some played once and then gone. Others were added to the loops and were coupled with occasional returns to earlier themes. It was riveting. As was Gold, opening with a pulsing throbbing heartbeat, eerie half whispers & breathing (samples or imagined?) as the song swirled into shape. The crowd captivated (and blissfully silent throughout this and the other numbers). 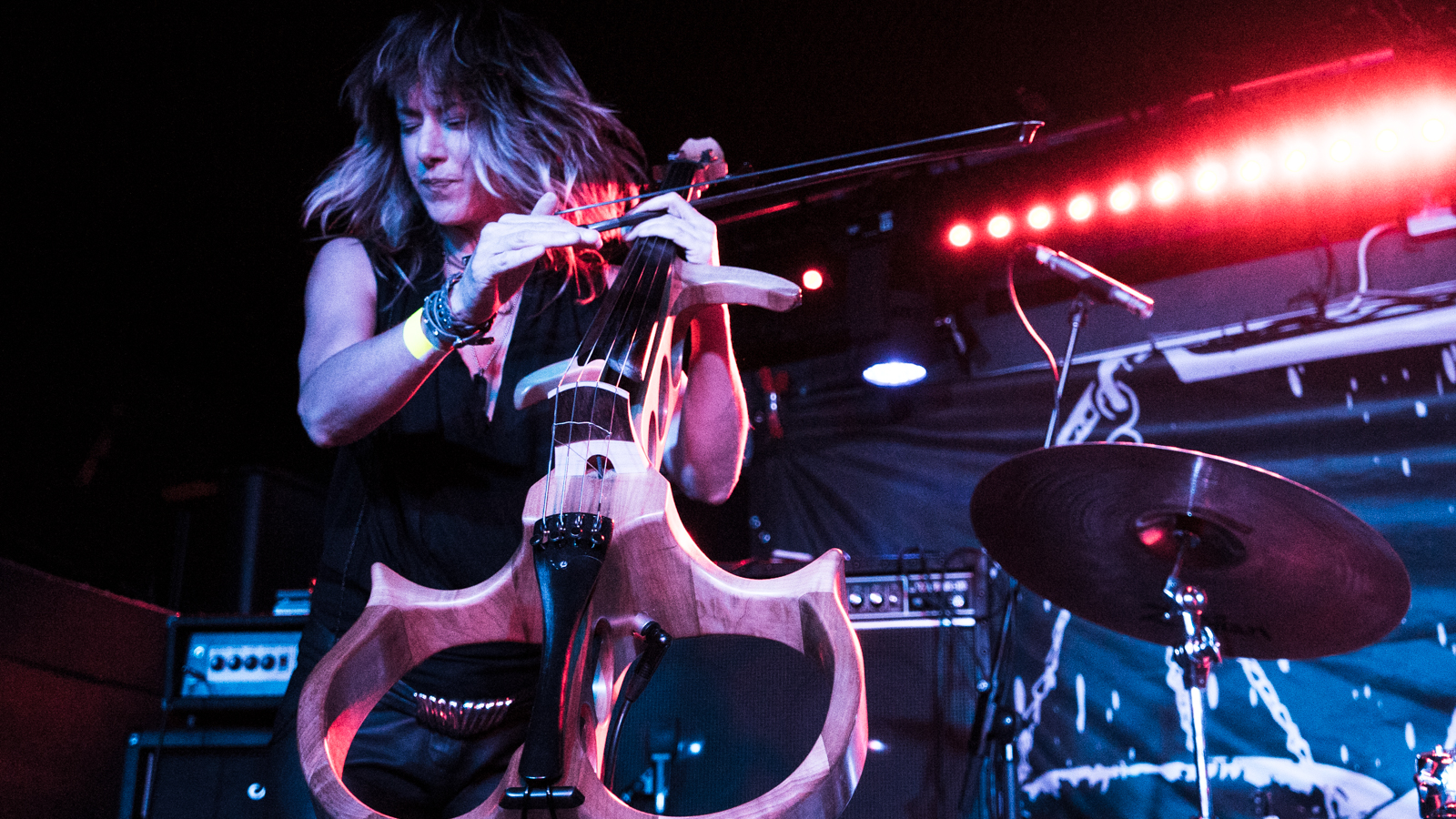 Quail offered us Reya Pavan next, played only twice before and “…fucked up both times”. This dialled down the mood from eerie to disturbing via sepulchral, a beast of a piece that Quail really worked at, totally absorbed, totally committed. Mandrel Cantos (built from an initially disjointed beat) allowed Quail to produce sounds from the cello that went from Kraftwerk bleeps and bloops to small passages evocative of Dave Gilmour’s lead work. Remarkable stuff. The song changed gear a few times – very danceable beat at one stage – big chunks of, well, hefty riffs, before reaching a lovely climax. 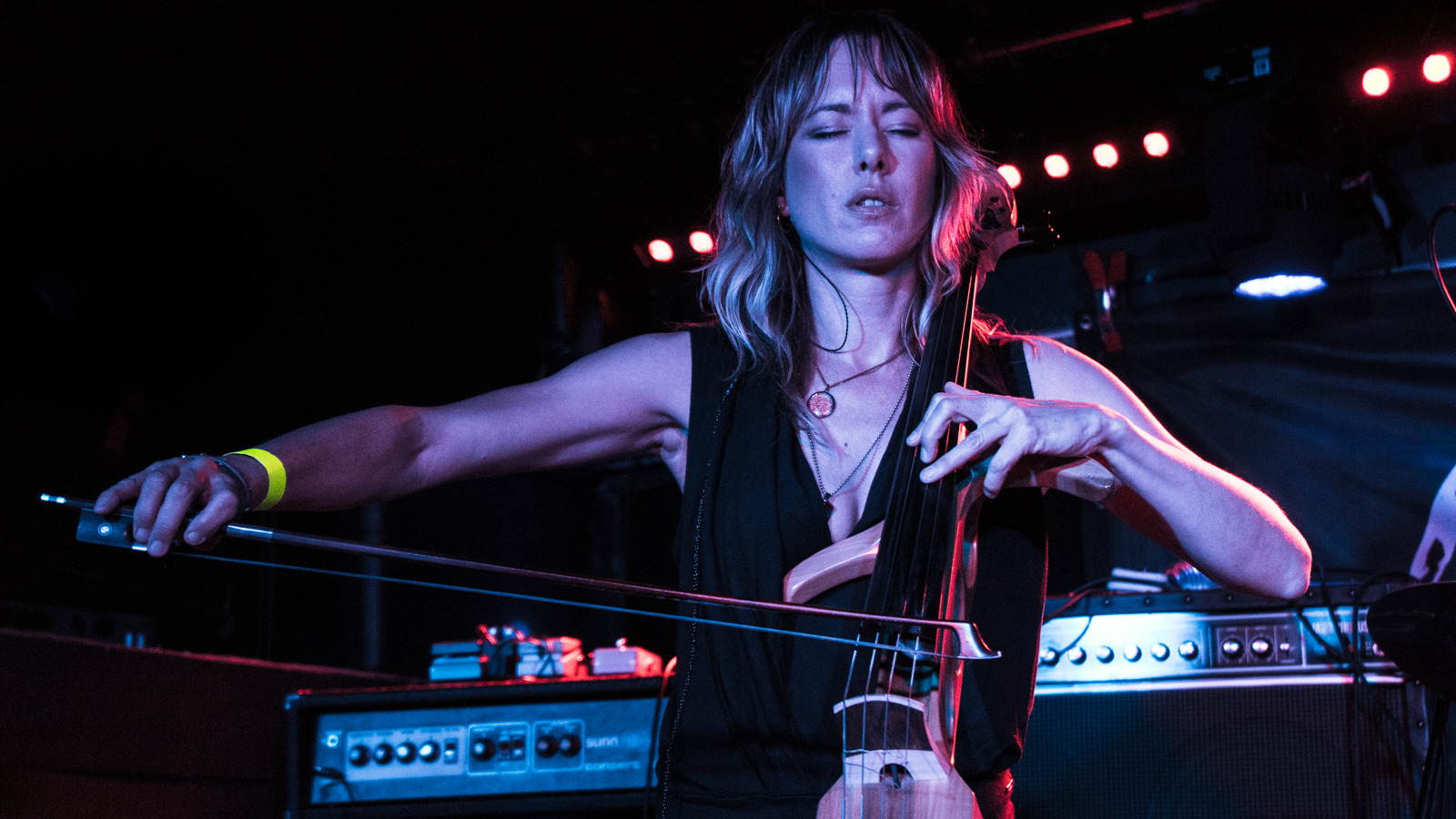 Negotiations with Sam in the booth allowed the final half-song – Adder Stone – Quail telling herself to “…just shut up and get on with” after instructing us to imagine the most fabulous introduction to the tune as she was dropping it for brevity. She built the song with deep, sonorous purpose, her suggestion to imagine waves and seas rang true as the music conveyed oceanic images. But these weren’t friendly seas, the deep, deep solo suggesting a dark mass of water teeming with unknown life, far more H P Lovecraft than Captain Birdseye. A devilish shanty solo lightened the mood and then Quail brought forth a sullen dawn on calmer waters.

Whilst Quail went about her performance with serious intent, fully focussed and immersed, she was delightfully engaging between songs. She mentioned she wanted to grin and smile during the performance but that caused her in-ear monitors to fall out. There was banter with the sound man and crowd, all done off mic due to a technical hitch. Her performance was physical too, almost dancing with the cello a times, gesticulating to empathises crescendos and sensual with it. 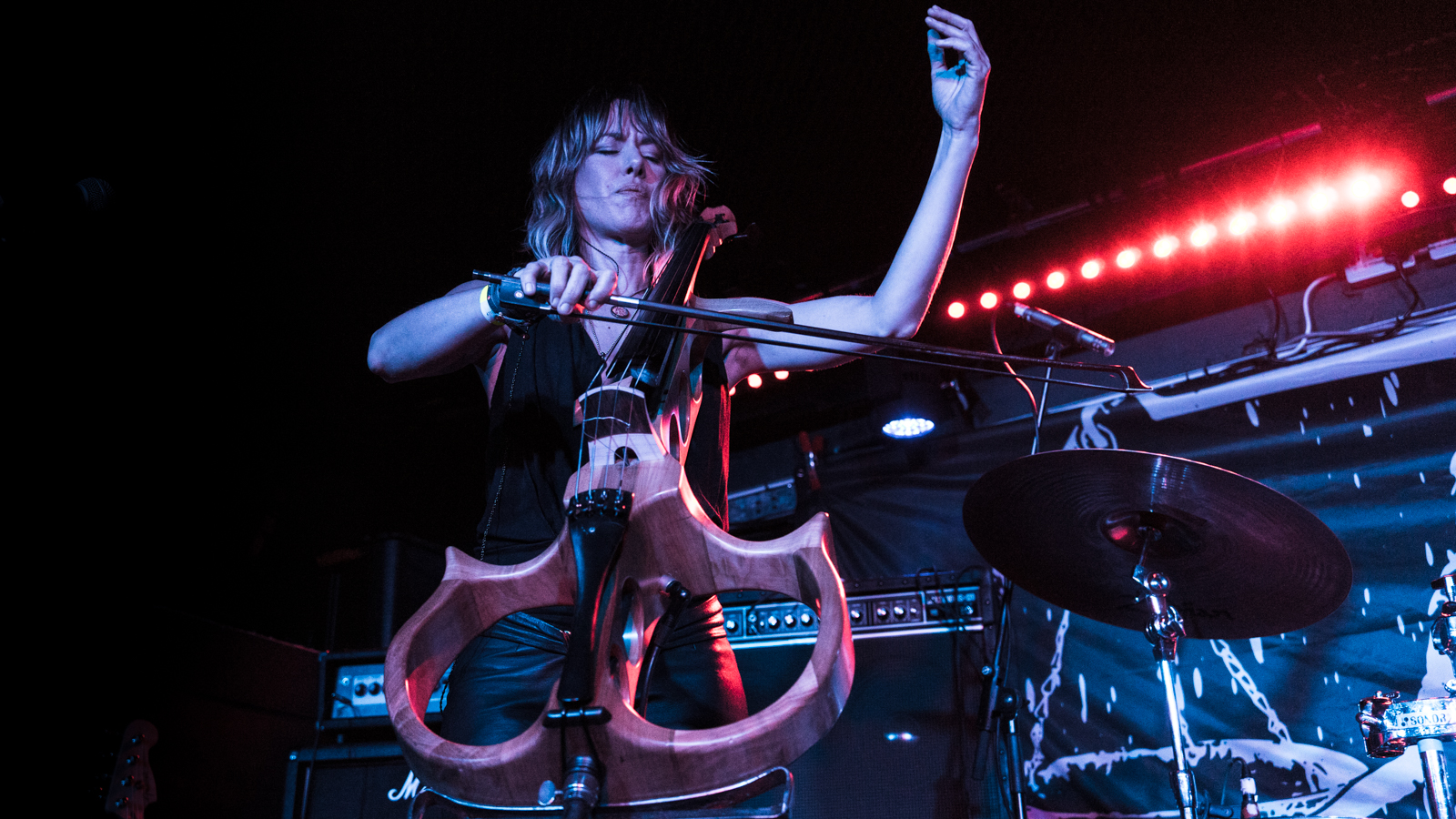 This was a masterclass in truly progressive music (in fact she won the 2019 Limelight Newcomer award from Prog Magazine this year) and inclusive too. Difficult to pin down: post metal, avantgarde, classical, ambient? No – all of them and more. She’s gonna be back in town next year, if you want to be challenged and entertained watch our listings for details.

Emma Ruth Rundle disingenuously introduced herself with a simple “Good evening, I’m Emma and we’re going to play some music”. But it was honest and accurate, she was Emma and she and her three-piece band did play some music. Music that was sombre and dark, yet strangely uplifting. There was shadowy drama in the words, matched by the musical settings, but the performance was cathartic. For all the talk of her gloomy, gothic folk (blah blah) this was a rewarding and pleasurable experience, evidenced by the grinning crowd, vocal with generous praise between tunes. 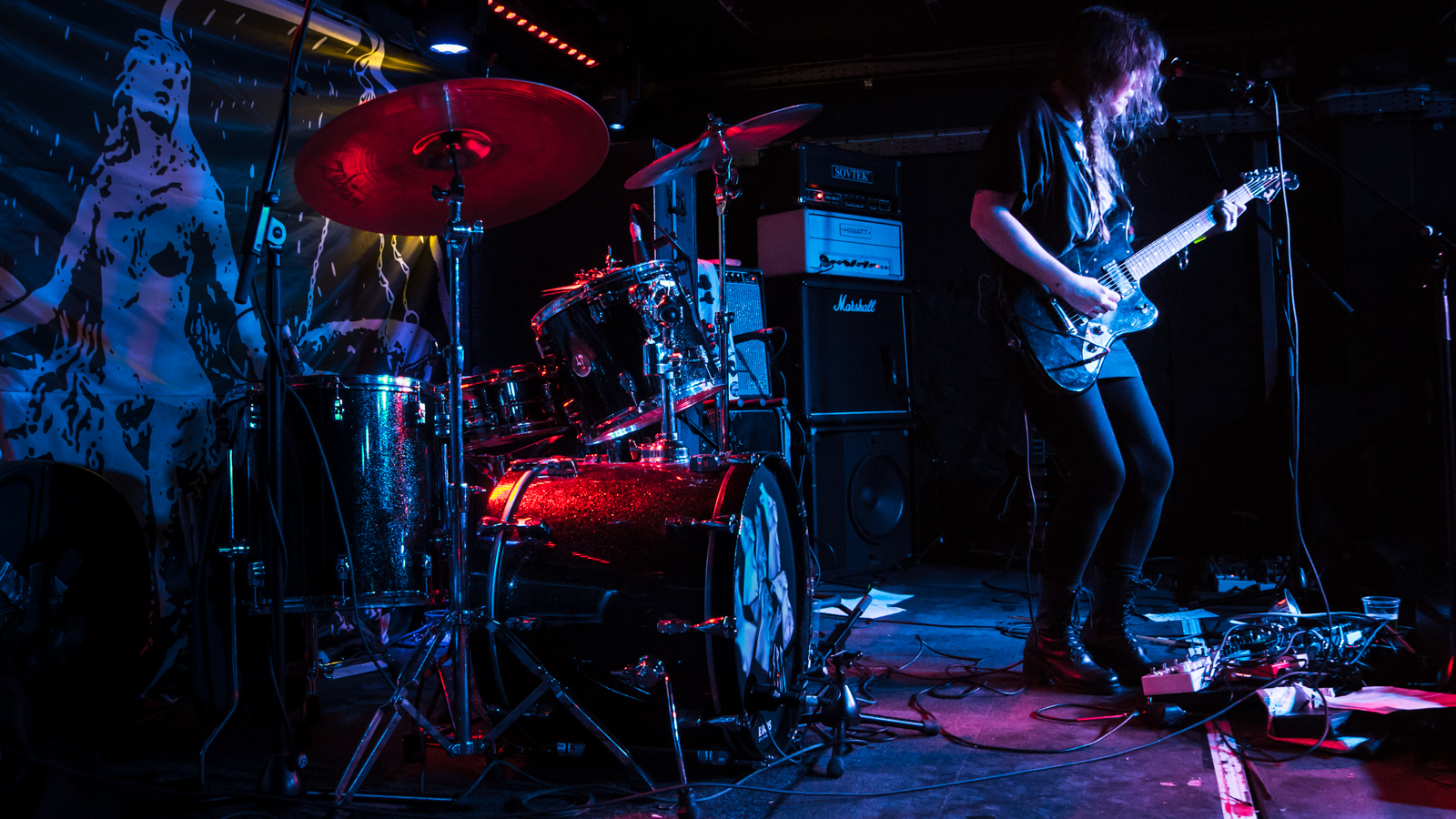 Fever Dreams opened proceedings, a languid little number cocooned in some weighty guitars, propelled by drums and bass, and liberated by soaring vocals. Halfway through the band paused for breath, slowing things down for some atmospheric vocals over delicate fills, nimble bass and delicate guitar. Apathy on the Indiana Border picked up the pace, hypnotic drums and throbbing, thrusting bass pushing the song ever forward as the guitars interlocked, spooky and spectral. 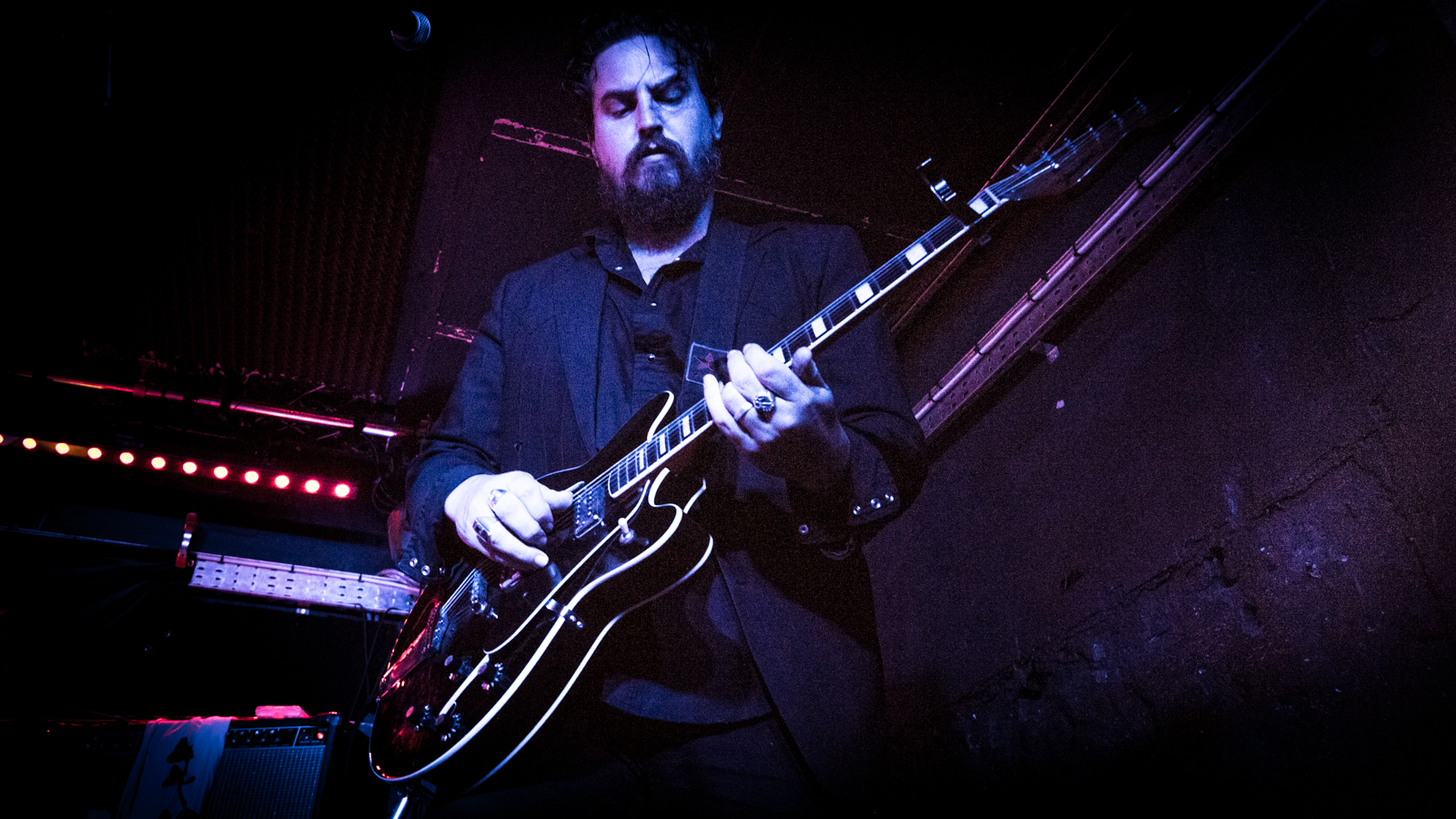 Thereafter the set ebbed and flowed as the music filled up the room (packed wall to wall) immersing the crowd completely, as they swayed with its sinuous rhythms, drawn into the mind of ERR. Marked for Death was received with rapture but Dark Horse (enlivened by unexpected fills on the kit) also got a huge welcome. Light Song really came to life on stage, effective backing vocals decorating a beast of a rendition.

Drenched in effects ERR’s voice was effectively a fifth instrument, powerful and with a deceptively wide range. Words were almost whispered and choruses forceful, with verses not always perfectly audible but coming into view (as it were) and in and out of focus (as it were). ERR is a strong live vocalist, nothing fey, nothing folky (except when required), she was a big presence behind the mic. Her guitar playing was confident too (unsurprisingly) and she managed to use a bow without getting anywhere near evoking J*mmy P*ge. 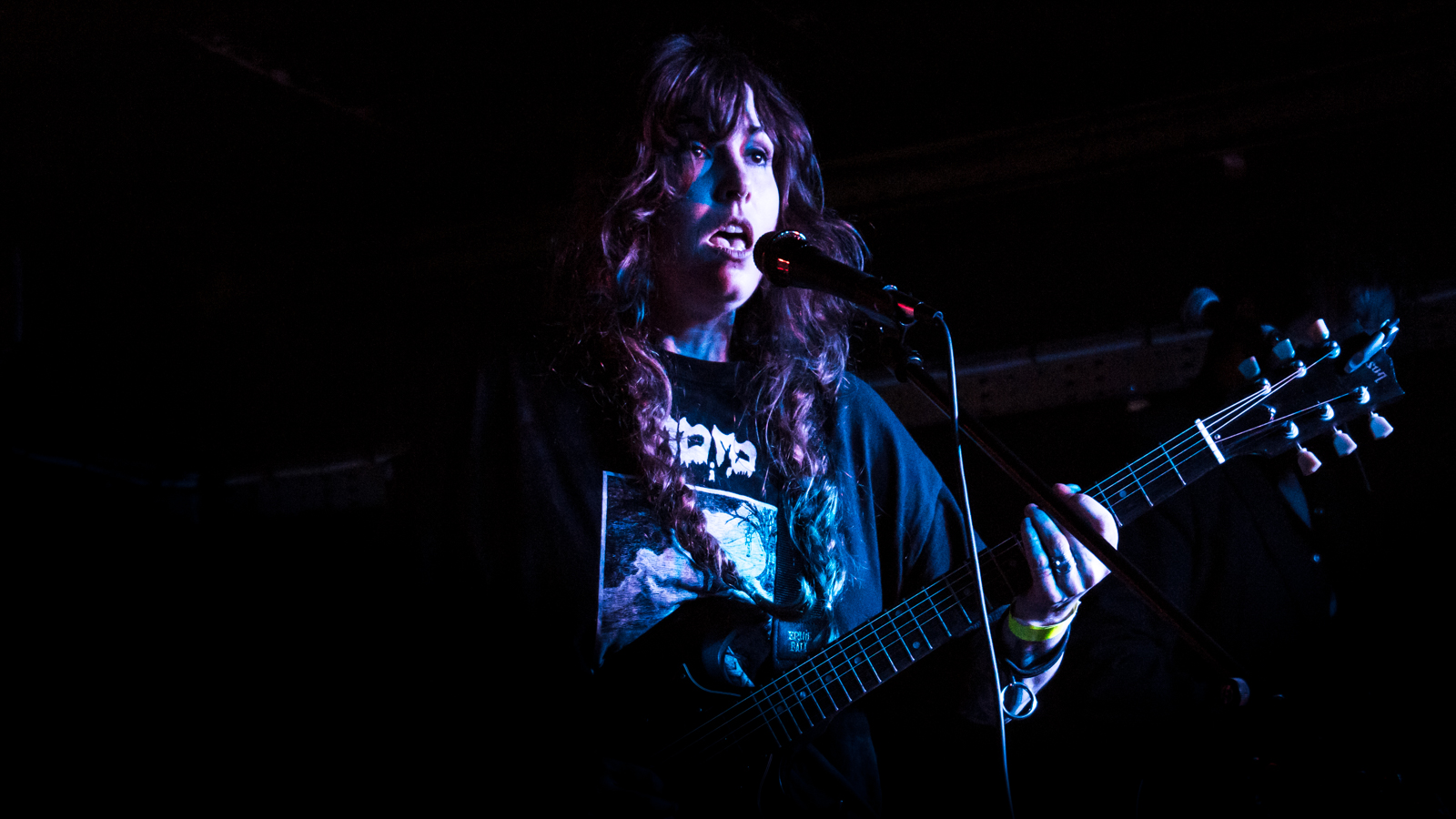 The music itself straddled genres, guitars saturated with reverb conjured up both surf and sand, but deserts rather than the beach. There was a country twang at times too, and pealing notes with solos that were delicate yet strong, no howling, note-bending fret frenzies here. The rhythm section was subtle but powerful, in fact there were times when they meshed with the heavier guitar passages and conjured up Crazy Horse. Other times they could have been sound tracking a film noir spaghetti western crossover with Hitchcockian overtones. 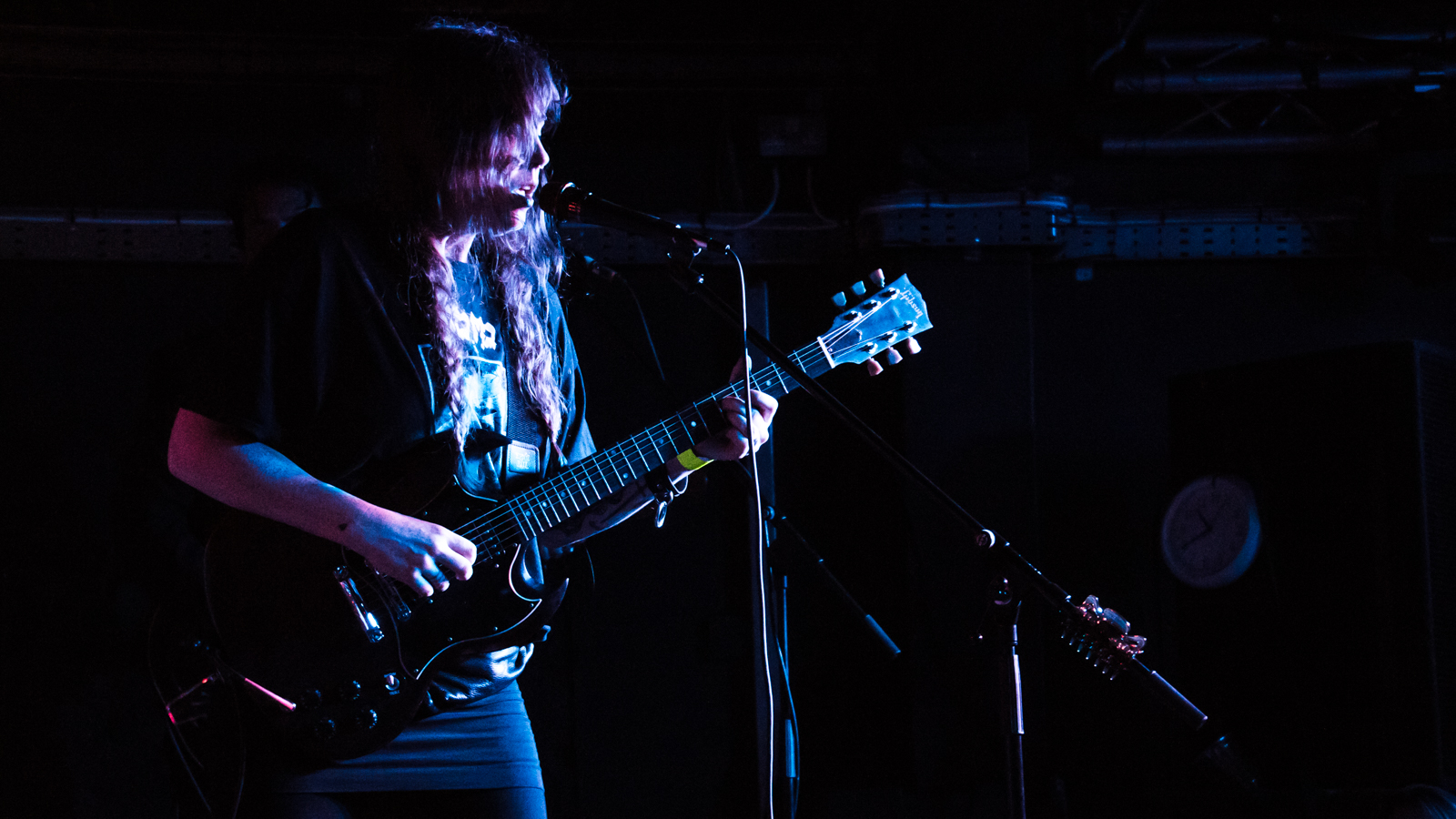 It was a relatively static performance, the players certainly moved but with understatement, they were there in service of the songs and let the music speak without the need for posturing or shape throwing. And in truth it would have been absurd to see a kinetic performance, the songs didn’t need it, nor did they lend themselves to a foot on the monitor or headbanging frenzy. 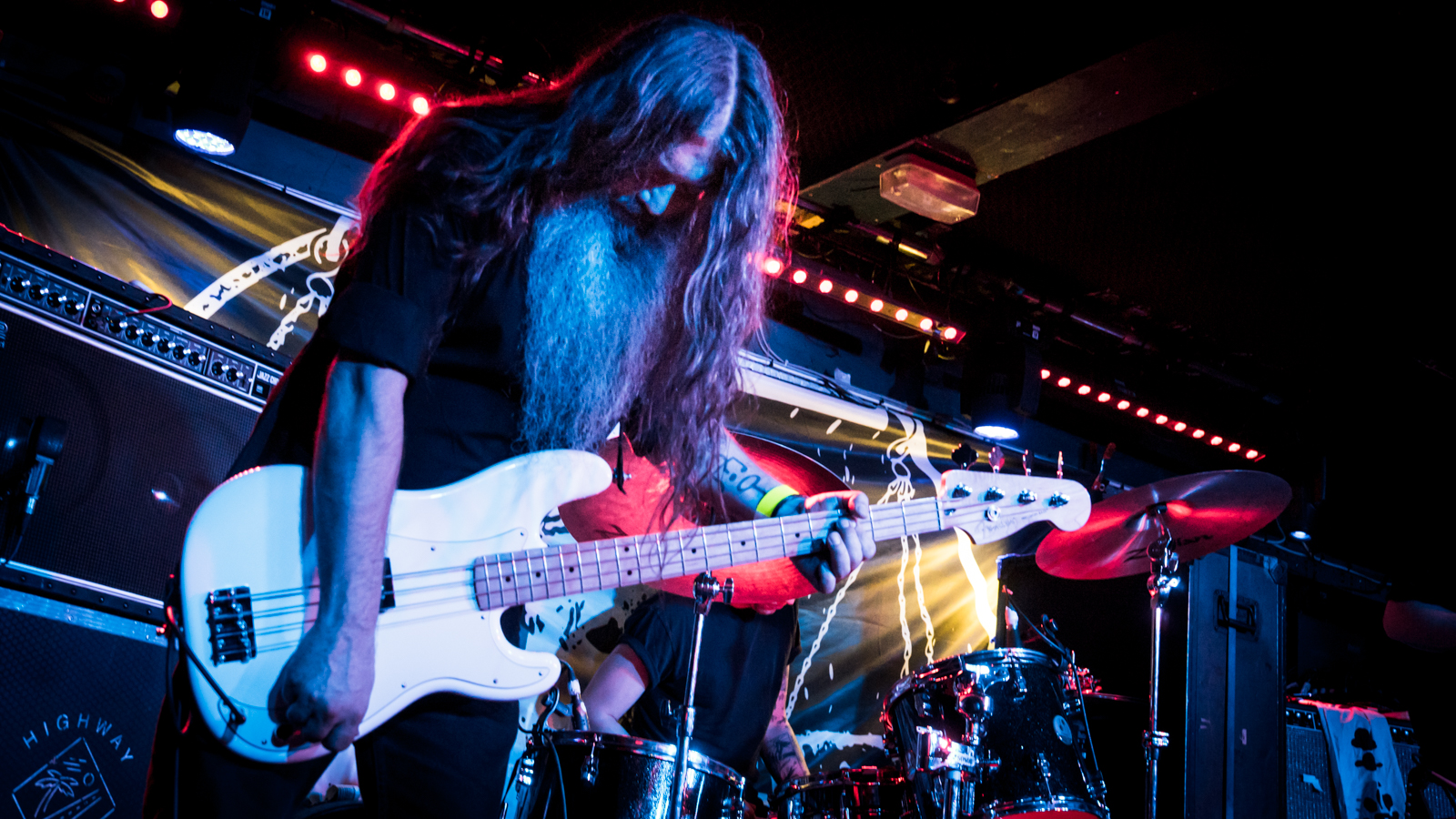 The final tune was a non-encore (i.e. the band left the stage but ERR said it would be “…lame for me to go and stand over there and come back” So she just stayed and cracked on). Asking for all the effects to be removed from her mic, she then left us with an epic version of Real Big Sky. The guitar was rampant, but her effects free voice was clear, powerful and the words crystal clear, easily matching the music. And then as the last chords reverberated, she was gone – “See you outside” –scampering through the applauding crowd. 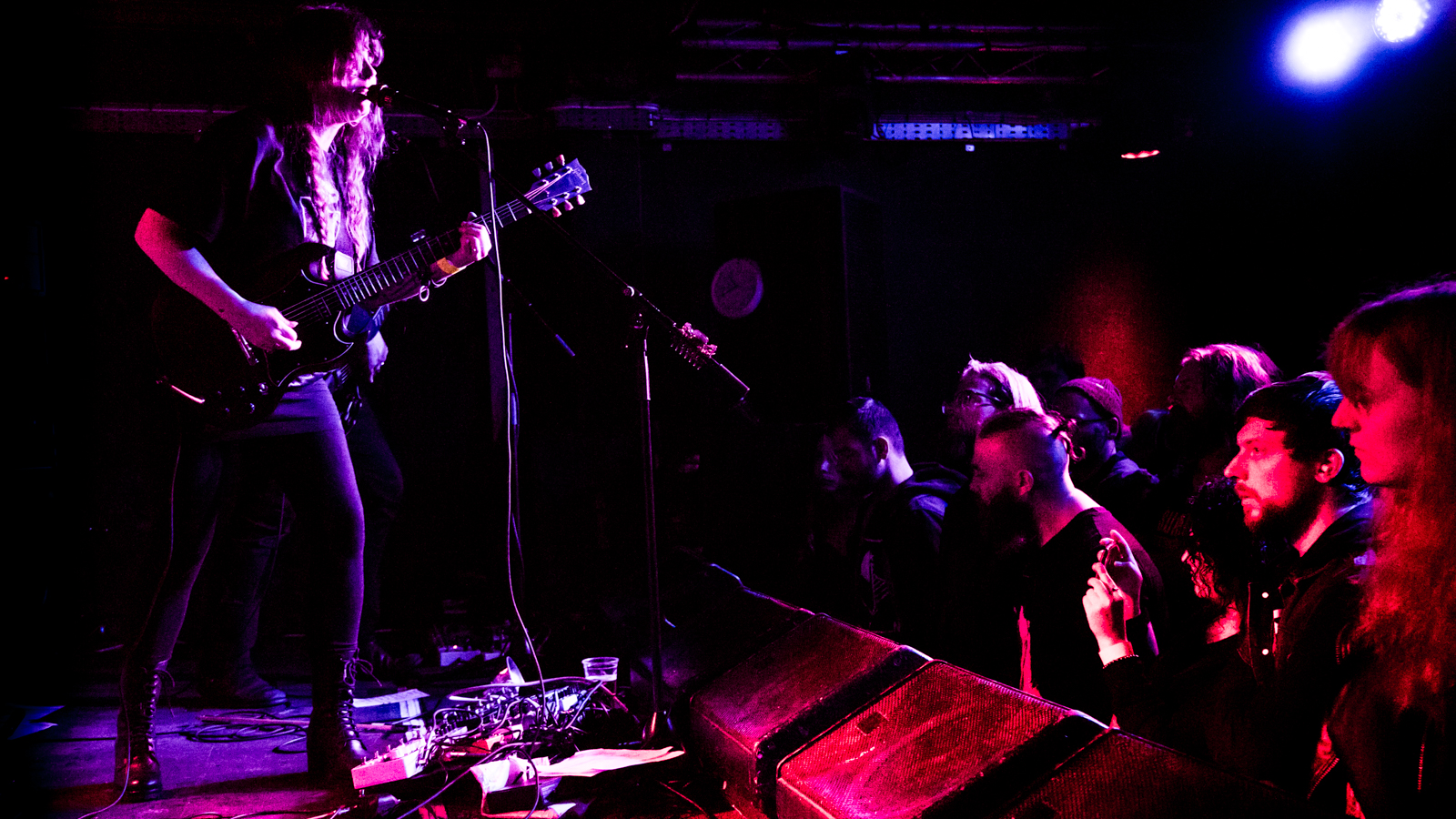 This was a short set but a supremely satisfying set: music of this quality, played with dark passion really does prove that less is more. The trendsetters and guardians of taste are once again telling us that rock is dead but tonight proved otherwise. ERR and her band showed that even after all these decades, guitars, bass and drums can be used to thrilling effect. A packed-out room and a virtually sold out tour suggest the people know better.

All pix by Phil Riley